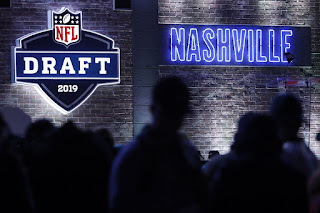 As a Nashville resident, the recent NFL Draft brought a whole new level of excitement for those of us locally and for NFL fans around the country.  With only 80 days till the kick off of the NFL football season, we are all watching closely to see what happens to our favorite team, our favorite players and how their preseason ramps up.  For some of us, we are already scoping out our fantasy football teams, who the players will be and how they perform in preseason.

In preparation for my next blog, I was reviewing some old posts and happen to see one that I wrote back in 2013 entitled "NFL ACL Epidemic - Will This Season Be Any Different?".  Out of curiosity, I read through it to see, had anything changed?  As I read through this previous blog, I was a little saddened, disheartened, discouraged and little frustrated.  You would think we all the resources that are available to the NFL and the knowledge we have on what puts an athlete at risk that we would have seen significant improvement in these numbers.  Results speak for themselves.  The table below is what the NFL reports for ACL tears from 2012 to 2017. 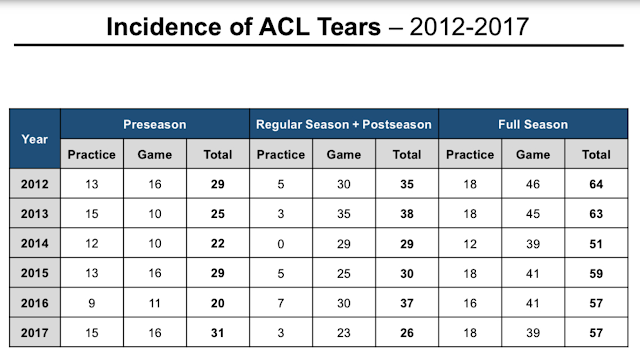 As much as I would love to believe it should be a 100% focus on athlete safety and health, the harsh reality is that performance/results is what motivates and drives change in professional organizations.  Considering this, you would think a study like Mai et al Am J Sports Med 2017 would be motivation enough.  In this study, the authors looked at NFL, NBA, NHL and MLB players and compared their individual performance after returning to play following an ACL reconstuction.  What the study found was that NFL players had a decrease in performance across all performance measures collected for up to two years after the ACLR and they shortened their professional career by up to 2 years. 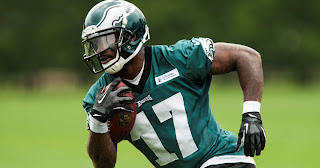 So let's think about this for a moment.  This study looked at players "after" return to play.  This is key because most players are out for one whole season after the ACL reconstruction.  So, according to the results of this study, the true impact is 3 years.  One for the season that is lost for the player to have surgery and rehab and then the 2 years decreased performance upon return to play.  Considering, the financial impact to the team and the player is huge.  For the team, they may be loosing a key player (or their high performance) for up to 3 years from the injury.  This can impact wins, tickets sales, and sponsors.  For the player, this also has huge financial ramifications with lost bonuses and future earning potential.

After hearing this, we may be thinking to ourselves, well that is just one study.  If that were the case across the board, then surely the NFL would do something about this and things would change.  However, in a study by Mohtadi et al Am J Sport Med 2018 , the authors did a systematic review of the literature to see what the impact of an ACLR was on future athletic performance.  Although elite athletes did return to their previous level of performance, this: 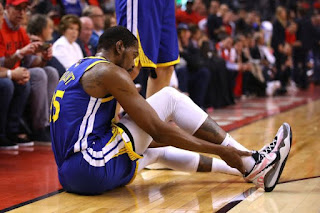 Needless to say, the studies are clear.  Future performance is impacted!  For you and I, this may be something we can use when determining our fantasy football team.  However, this is not good for players or for teams.  There are a lot of issues that lead up to why this may be the case.  One major issue is how we are returning athletes to sport.  With the recent injury with NBA player Kevin Durant after his return from a calf injury, this has a lot of folks questioning how we make these decisions.  Since this was the topic of discussion in our last blog series, we won't go into that in detail.  What we do know, is we need to assess for movements we know that place them at risk and combine that with field data.

Another factor and I hate to say it, is the rehab.  As PTs, ATCs and strength coaches, as much as we may think we change movement, do we really?  We are going to continue this discussion next week as we look at a recent study by King et al Am J Sports Med 2019, so stay tuned.


We hope you enjoyed the start of this series.  If you did, please share with your colleague and follow us on instagrm @ bjjpt_acl_guy and twitter @acl_prevention.  #ViPerformAMI #ACLPlayItSafe