With the impending NFL football season fast approaching, it got us to wondering, will this season be any different when it comes to ACL injuries?  Looking at the stats provided by the NFL, despite all that we know, all the advances that have been made, it appears from the numbers that there has not been much change over the last 6 years.  Will this season be different?  What we do know is that if we do the same thing this year as we have done in previous years, the results will remain the same. 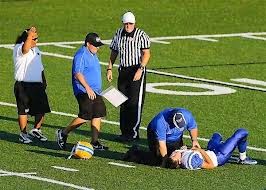 Considering this, one of the things we talked about is that as rehab professionals, PTs, ATCs, strength coaches, we think we change movement with our interventions.  But do we truly change "movement"?  At the conclusion of last week's discussion, we brought up a recent study by King et al Am J Sports Med 2019 which might give us some insight to.

Purpose: The purpose of this study was to identify differences in magnitude of asymmetry of biomechanical and performance variables exist between ACLR rehab athletes and health cohorts. 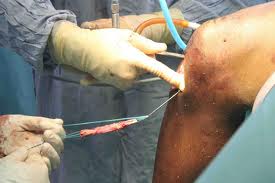 Methods:  156 male athletes (between 18 and 35 years old) were recruited after initial diagnosis and
before surgery between 2014 and 2015.  Those with concurrent ligament reconstuction, previous ACL, meniscal tear or chondral injury were not included in the study.  All ACLR athletes had either bone-patellar tendon-bone graft or hamstring graft.  All ACLR athletes went through an accelerated ACL protocol with weight-bearing as tolerated on crutches for 2 weeks followed by progressive strengthening and neuromuscular control program.  Advanced stages included power and plyometric drills advancing to linear running and CoD (change of direction) drills.  ACLR athletes were followed by their orthopedic surgeon at 2 weeks, 3 months and 6 to 9 months.  Physical testing was performed on each athlete at 6 and 9 months postoperatively.

All testing took place in a 3D biomechanics laboratory.  After completing a standardized warm-up, each completed the testing protocol which consisted of:


Each participant performed 2 submaximal trials and then 3 trials on each test with a 30 second rest in between each trial.  The mean result of the 3 trials was determined and used.

Results: There were differences in asymmetry in biomechanical variables across all jump and CoD tests with greater asymmetries noted in the ACLR group.  The majority of differences were seen in motion in the saggital and frontal planes with larger differences seen in the jumping tasks versus CoD.  Single leg drop jump demonstrated the largest difference in performance asymmetry with smaller differences in CoD and none in single leg hop for distance. 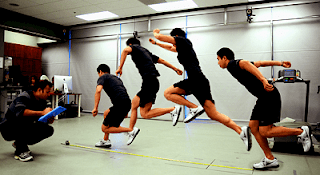 Discussion: Before we talk about what this means, let's talk about a flaws that I see with the design.  This is only my personal opinion but I do see several flaws related with the the testing protocol.  According to Melick et al Knee Surg Sports Traumatol Arthrosc 2019, ACLR athletes quality of motion is significantly impacted by fatigue.  In this study, they only performed 3 reps, provided a 30 second rest between reps and each test was done right then left prior to moving onto the next test.  All of these add to increased rest and prevent the build up of fatigue.  Why does that matter?  Because I think the results we are seeing here is only a small snap shot of truly what is happening.  I think if that had been kept in mind during the testing that the athletes movement would have looked much worse and been a much better representation of how they would look on the field.

Considering, there are notable asymmetries that are noted post ACLR rehab. In looking at movement, there was more asymmetry noted in jumping tasks versus CoD tasks.  Single limb testing movement asymmetry was greater than bilateral testing.  For performance, performance of the single leg drop jump height was more asymmetrical than timing on change of direction which was greater than distance on single leg hop for distance.  Considering the last two (CoD and SL hop for distance) this falls right in line with what Wren et al J Ortho Sport Phy Ther 2018 found.  This study showed that single limb hop and hop for distance could be symmetrical.  Part of that symmetry may be do to deconditioning on the non-involved limb and part due to the athlete sandbagging results on the non-involved limb so matches the involved.  That said, this study also clearly showed that simple ability to perform the task does not indicate the quality of movement to accomplish the task.


Next week, we will continue this discussion about what this means to us and what this could mean for the NFL Player.  We hope you enjoyed the start of this series.  If you did, please share with your colleague and follow us on instagrm @ bjjpt_acl_guy and twitter @acl_prevention.  #ViPerformAMI #ACLPlayItSafe