RTPlay Following ACLR - How Do We Know When Is The Right Time? - Part XI

Last week we began to break down several of the specific movements of the Athletic Movement Index.  With each of these, we are breaking down the test itself, what common deviations we see and how this can guide us to a root cause and correctives to improve.  Keeping in mind this is not an exhaustive list by any means but does include some of the most common deviations we see. 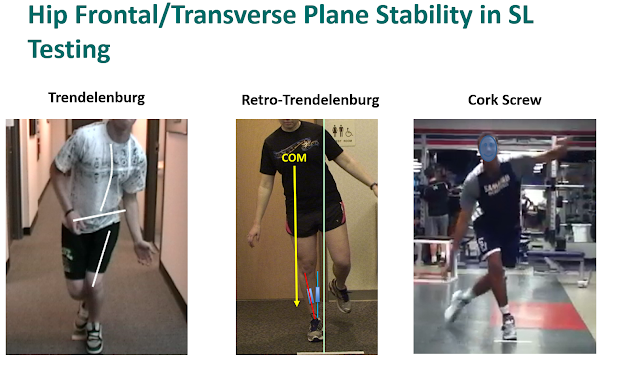 As depicted here, there are three common motions we see at the hip during single limb testing.  Typically these are indicative of a progression of weakness at the hip from the left to the right.


With single limb testing, we start to see these motions at the hip become more obvious.  It becomes even more obvious as we progress to hoping motion and hoping in multiple directions.  When these motions become excessive, we often will see the athlete lose balance.  In the test, this is recorded when the athlete touches down (with the leg they are holding up) or when they create stability by stabilizing against an external object (table, chair, etc).

We have also discussed the topic of "Time to Stability or TTS".  This is the time it takes the athlete to stabilize after landing from a hop or multi-directional hop.  We see this as the additional hops the athlete has once they land.  We have seen and the research supports that the more hops they have to stabilize (or time), the more likely they are to get injured.  What we see is that athletes who have a lack of pelvic stability (represented as a trendelenburg, retro-trendelenburg or cork screw) have much longer TTS than those who demonstrate the ability to stabilize their pelvis.

Since these motions are represented in all the single limb tests, it is important for us all to be able to identify them and put training in our programs that will correct.

Finally, prior to talking about each of the tests, we should also discuss the testing position.  When testing single leg activities, we prefer the athlete to be in the "athletic" position.  In this position, the knee is flexed to 45-90 degrees and the hip is in a neutral to slightly extended position (10-20 degrees).  Not only is this more representative of a running position but also requires much more glut activity throughout the motion when compared to putting the hip in a flexed position or directly under the athlete.  It is important that the athlete maintains this position (or attempts to) throughout the course of the test. 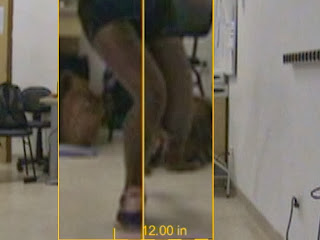 Single Leg Squat, Single Leg Hop, Single Leg Hop Plant - during this series of tests, we look for the ability to perform the test through an "expected range of motion" (range of motion is based on our normative data) while maintaining control of frontal plane motion (both how much the knee moves and the speed at which it moves).  Total frontal plane motion (varus to valgus) should be = to or < 10 degrees and valgus speed is dependent on the movement that is being performed (defined below).

As you can see, specific isolated movements within each of the tested positions can guide us on much more targeted interventions.  We hope you enjoyed this series.  If you did, please share with your colleague and follow us on instagrm @ bjjpt_acl_guy and twitter @acl_prevention.  #ViPerformAMI #ACLPlayItSafe