Adult women have 6% fewer red blood cells per liter of blood than men.  Women also have a 10 to 15% lower hemoglobin concentration and hematocrit as compared to men.  As a result, female athletes transport less oxygen per liter of blood than males do.  This could explain why female athletes are more susceptible to fatigue which can lead to increased pathokinematics later in the game, and ultimately more injuries during sporting activities.  Cardiovascular conditioning and muscle endurance training (via supersets and other strategies which will be discussed in later chapters) become even more important for female athletes because of these circulatory differences.   It is also important to educate female athletes about anemia, sports-induced anemia and a potential increase in the need for iron intake via natural or supplemental sources as well, particularly when involved in sports with heavy endurance or intensity components.

Not only is there a difference in lung volumes but also in the size of the heart.  Because of smaller hearts, the volume of blood the heart is able to hold and move with each contraction (stroke volume) is smaller in females, resulting in lower cardiac output.  Less blood is pumped per beat and therefore, less oxygen is transported to the cells of the body.  As a result, women have a higher heart rate than men when at the same VO2 max (an excellent physiological indicator of cardiorespiratory endurance).

Knowing that these physiological differences exist between males and females, it is extremely important to consider the aerobic demands of a given sport and to include training protocols that address those demands specifically.  This includes not only cardiovascular training, but incorporating training methods which tax muscular strength and endurance while concurrently elevating heart rate. 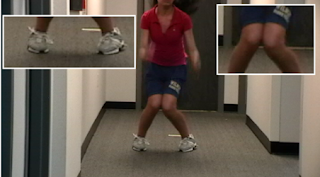 Studies focusing on biomechanical risk factors have identified gender related differences relative to the position of the hip, knee and ankle during performance of landing and cutting tasks.  It is thought that pathokinematics demonstrated by females place them at greater risk for anterior cruciate ligament (ACL) injury due in part to their potential to excessively load the ligament during landing and cutting tasks in particular.   Specifically, internal rotation of the hip and knee valgus (resulting from hip adduction) are thought to place increased stress on the ACL as mentioned before.  Studies have found that when comparing males and females, females demonstrate greater hip internal rotation[i] [ii] and knee valgus[iii] [iv] [v] when performing landing tasks. In addition, females have been found to demonstrate greater valgus torques at the knee during cutting[vi] [vii] and landing tasks,[viii] further increasing the potential for excessive loading of the ligament.  This indicates not only a need for proprioceptive training for the female athlete but also the need for implementing jump training and training in movements specific to the sport.

Often there is confusion in the literature about the concepts of neuromuscular function, kinesthesia and proprioception.  Proprioception is a specialized sense that includes information about the position of a joint in the human body and the sensation of movement of that joint, or kinesthesia.  This information is transmitted via the central nervous system and used in unconscious neuromuscular control.[ix]   Females have been found to have less positional body awareness regarding movement or kinesthesia than males.  There are many hypotheses under discussion about why this is true.  Some hypothesize that this is the result of less overall athletic experience in general, fewer types of athletic experiences or fewer exposures to certain types of athletic experiences.  Prior to the implementation of Title IX, female athletes would get involved in athletics at later ages than male athletes and therefore had less overall athletic exposure or training.  Others speculate that the differences may be due to a lack of proximal control, which is control of the body nearest to a given point of reference.  In other words, the hips and lower back (or the core) are proximal to the lower leg, and when there is less control in the core, there is an increase in the likelihood of injury in the proximate body parts, i.e., the knee and/or the foot and ankle.

Anatomical differences in pelvic anatomy between males and females may contribute to increased weakness of the gluteus medius, lower abdominals and transverse abdominus, all of which contribute to neuromuscular control of the core as noted above.  According to Zazulack et. al. in studies published in 2006, there are significant gender differences in the neuromuscular control of the core which contribute to abnormal movement patterns at the hip and knee. [x]  In a study published in the American Journal of Sports Medicine in 2003, there was a significant gender difference in electromyographic activity of the proximal hip components with single leg squats (specifically the gluteus medius muscle).[xi]  When assessing proprioception, if there is a loss of this proximal hip stability, then the test outcomes are poor.

Decreased kinesthesia or proprioception has been indicated as a direct causative factor in non-contact ALC injuries, as it affects an athletes’ ability to adapt to unexpected obstacles and safely control sudden changes in the direction of movement.  In a study published in The American Journal of Sports Medicine by Hewitt, et al in 2005, women were found to have significantly less neuromuscular control of the lower leg resulting in increased valgus loading on the ACL.[xii]   This lack of control can also lead to increased stress to the foot and ankle, hip and lower back.  A study from 1996 showed that proprioceptive training alone reduced the incidence of ACL injuries by 7 times, indicating that this type of training by itself can have a significant impact on performance and injury prevention.[xiii]   In a follow up study in the Journal of Knee Surgery in 2005, the authors found that even moderate proprioceptive training significantly reduced the risk for knee injury, exclusive of any other type of change in training protocols.[xiv]   Whether or not increased injury rates in females are the result of proximal hip weakness, decreased athletic exposure, or decreased kinesthesia or proprioception, including aggressive neuromuscular re-education should be an important part of any female athlete’s training protocol.