Last week we looked at the role of biomechanics and neuromuscular function.  This week we will wrap up this series by looking at the role of hormones and core/hip strength.

There has been a lot of evidence on the effects of gender specific hormones (i.e. estrogen and progesterone) on joint laxity and ligament strength.  Since the type and amount of circulating hormones are gender specific, studies have focused on the effects of “female” hormones on joint and ligament integrity.  It is speculated that the release of these hormones affects the laxity of the joint and possibly the strength of the ACL.  However, in spite of this assumption, currently there is little consensus in the medical community on the relationship between the female menstrual cycle and ACL injury.[i]

Core (Including the Hip) Strength:

The “core” has been a term that has emerged in the research and fitness literature over the last ten years that is currently used to describe anything that includes the abdomen.  Yet, despite the prevalence of this definition’s use and over use, it has not been well defined or well understood.  Many authors have attempted to define it but there has not been full consensus in the research of what defines or composes the core.

In the fitness industry, the core is typically thought of as the abdominal muscles and the lower back, as stated above.  However, in the medical research community, the core typically refers to the trunk and hip musculature including but not limited to: abdominals (upper abdominals, obliques and transverse abdominus), back extensors (multifidus, erector spinae and quadratus laborum), hip musculature (gluteus medius, gluteus maximus and tensor fascia lata), and external rotators of the hip and lower extremity musculature (quadriceps/hamstrings/sartorius/gracilis).  For our purposes, the term “core” will be used to define all of the musculature from the chest to the knees. 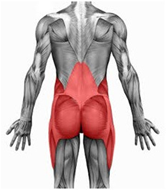 The reason we include this region is there are over 30 muscles that have some form of influence on the lumbar spine and pelvis and which greatly influence the way that force is absorbed and transmitted through this region to the extremities.  It is our belief that the muscles that influence the position of the spine and pelvis have a direct influence on the strength and control of the legs and hips.  Hip muscles, in particular the gluteus medius and hip external rotators, are also key muscles that work to prevent collapsing of the leg in toward the mid-line in full weight bearing situations and thereby prevent a resultant knee valgus (a component of pathokinematics).  The research seems to support this supposition.

In a prospective study of 140 athletes during one season found that those who tore their ACLs had significantly weaker hip abductors and external rotators than those who remained healthy.[ii]  A study published in the Journal of Orthopedic and Sports Physical Therapy in 2007 showed that improvement in trunk stability had a direct effect on vertical take-off velocity as well.[iii]  These studies indicate the need for core strengthening to be a major component and consideration in any performance and injury prevention program, particularly for females.   Focus areas should include the lower abdominals, the transverse abdominus and the gluteus medius muscles.

To demonstrate the importance of core strength and its correlation to lower extremity muscle strength, let’s take a look at the effect that poor core strength has specifically on quadriceps strength.  The quadriceps consist of 4 muscles (rectus femoris, vastus lateralis, vastus medialis and vastus intermedius) and this group of muscles crosses both the hip joint and the knee joint.  It originates at the pelvis (anterior superior iliac spine) and attaches below the knee (tibial tuberosity).  Poor strength of the core allows the pelvis to rotate and fall forward each time the leg is extended in walking or running activities, and this causes excessive movement of the pelvis.  This movement is defined based on the plane of motion in which it occurs.  A trendelenburg pattern occurs when there is movement of the pelvis in one plane, the coronal plane.  A corkscrew pattern occurs when there is movement of the pelvis in three planes, the coronal, transverse and sagittal planes.

These hip movements bring the origin of the quadriceps closer to the insertion point at the hip and thus shorten the length of the quadriceps.  Based on the information that we learned in Chapter 5 about length tension relationships, we know that this shortened position (even if only a millimeter’s difference) would prevent the quadriceps from producing as much force as they could if they were in their optimally extended position.  If the quadriceps are not able to produce optimal force, there would be a direct effect on power output, athletic performance and shock absorption at the knee.  The athletes with weaker quadriceps tend to have harder landings with jump stops and hence increased force to the patella femoral and tibial femoral joints.  This can add to increased risk for ligament and meniscal injuries at the knee.   Thus by this example, we can easily understand how decreased attention to hip and trunk strength training among both genders can result in poor control of the lower extremities leading to altered biomechanical patterns.

This is just one example of how poor strength and endurance of the core affects performance and mechanics in the lower limb.  But, there are similar effects of increased stress and excessive movements in the lumbar spine, the sacroiliac joint, the hip, the knee, and the foot and ankle areas.  Knowing the vast influence the core muscles have on the entire kinetic chain, including and especially the lower limbs, it becomes evident why it must be included in any prevention and performance enhancement program for both sexes.

In conclusion, we have discussed pathokinematics and the positive effect that addressing poor movement patterns in the athlete has on performance and injury prevention.  We have closely examined several important differences between males and females that influence movement patterns.  We also know that performance and strength training positively impacts athletic performance as well.  This has been well documented in the literature, and subsequently has become a standard part of athletics at the junior high, high school and collegiate levels.

In most settings however, the methodology and approach to performance and strength training has remained relatively unchanged in the last ten to fifteen years.  There continues to be little consideration of gender differences in the design and implementation of performance training programs.  Knowing some of the physiological differences between males and females aids us in modifying training routines to address these differences specifically and in the most effective and efficient ways.  As a result we are able to target weaknesses in the kinetic chain that can lead to injury and limit athletic performance for both genders.


Next week we will continue this discussion by looking at the impact that cardiovascular system has.  We hope you enjoy and share the passion and our blog with your colleagues is the biggest compliment. #ACL #Prevention @PhysioCorp