Last week, we started to look at the factors that contribute to the pathokinematics we see in our athletes.  This week we will continue that discussion by looking at peak skeletal height. 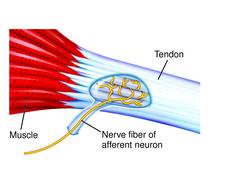 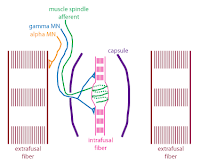 Peak height for girls is reached between 10.5 and 13 years of age.  Males reach their peak height between 12.5 to 15 years of age[i].  Any time there is a rapid growth rate, in boys or girls, there can also be a sense of clumsiness that accompanies that growth spurt.  This is often associated with muscles being stretched.  Changes in bone length results in the muscle being placed under tension which results in altered input to both the muscle spindles as well as the golgi tendon organ.   It is the combined input of these two proprioceptors that aid in our ability to sense changes in joint angle, muscle length and tension.  Integration of these “senses” in the higher centers allows us to know the position of our joints in space.  Over time, both systems acclimate to the increase in length and balance improves.

The timing of growth spurts and differences in the rate of growth for boys and girls can also result in muscle flexibility and strength differences between males and females.  This is particularly true for those muscles associated with the long bones, such as the quadriceps and hamstrings.  Because of these differences, we may expect to see a corresponding difference in abnormal movement patterns and associated injury rates in young males and females. 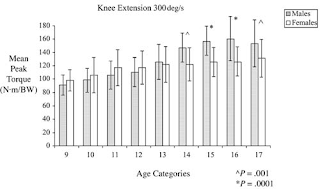 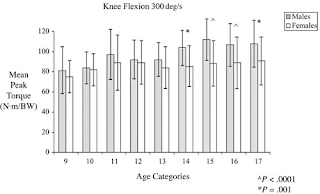 To further explore this idea, let’s consider the differences in quadriceps and hamstrings strength in males and females.  According to a study published in the American Journal of Sports Medicine in 2006, there is a significant gender difference in quadricep and hamstring strength. [ii]   In this study, untrained individuals were studied in order to account for gender and age related changes in males and females between the ages of 9 and 17.  As age increased, there was a corresponding increase in strength in males, especially in the quadriceps and hamstrings, but increases were less in females.  Although quadriceps strength continues to increase   Because of this relative weakness in the large muscles of the lower extremity in females we might expect to see a corresponding increase in pathokinematics in sporting or other activities that involve heavy loads, high intensities, significant endurance requirements, rapid speed or directional changes, or cutting, jumping and stopping maneuvers.
for both males and females throughout this growth period, in females quadriceps and hamstring strength peaks at a much earlier age than for males, in relation to bone length.

It should also be noted that with an increase in height during growth phases there is also a change in the center of gravity, which with the previously mentioned changes in proprioception, can result in a significant change in overall sense of balance.  These factors, either alone or in combination, may suggest that females, especially young females in this age bracket may be more susceptible to lower extremity pathokinematics that ultimately lead to injury.

Active adult women have 8-10% more body fat than men of the same activity level and age.  When looking at the ratio of lean body mass to fat, it is 5:1 (5 pounds of lean mass to 1 pound of fat) prior to puberty for females.  The ratio of lean body mass to fat then changes in females from 5:1 to 3:1 between the time puberty begins and the beginning of menstruation[iii].  This means that the percentage of total body fat relative to lean body mass is greater after the onset of menstruation in females.  It is also worth noting that females have a resting metabolic rate that is 5-10% lower than in males which may also be a contributing factor to a higher percentage of body fat in general.  This is important in the discussion of pathokinematics in females because as a result of smaller amounts of lean body mass in the female body relative to fat, we may expect to see a negative impact on movement patterns, which can lead to a wide variety of lower extremity injuries over time from the lumbar spine to the foot.  This can become even more of a factor in situations where the body is subjected to higher speed, strength/power, agility or endurance requirements.

Muscle fiber and the total muscle cross sectional area in women averages between 60-85% as compared to the same areas in men.  As mentioned above, researchers showed in a 2006 study that there are notable gender differences in strength of quadriceps and hamstrings in trained and untrained subjects.[iv]  Ahmad, et al in 2006 also showed that female’s quadriceps strength develops at a faster rate than their hamstring strength which leads to altered quadriceps to hamstring ratios and could make them more susceptible to ACL injuries. [v]  The result is decreased dynamic control and increased stress to the ACL and knee during athletic activities in females.

However, differences in absolute strength between sexes can virtually be eliminated when strength is expressed relative to fat free weight.  Therefore the difference in muscle strength between trained women and trained men appears to be explained solely by muscle mass or size.  When looking at fast and slow twitch muscle fibers, the proportion of fast and slow twitch fibers is nearly equal in men and women.  Considering this, women can have the same relative strength (maximum force exerted in relation to body weight or muscle size) and power gains as male athletes when strength and power is expressed relative to fat free weight.  The training implications here are that females should be involved in strength resistance training in order to increase dynamic control and thereby reduce pathokinematics that can lead to injury.

Next week we will continue this discussion by looking at the impact that cardiovascular system has.  We hope you enjoy and share the passion and our blog with your colleagues is the biggest compliment. #ACL #Prevention @PhysioCorp