Is there an ACL Solution?

Our last four articles have focused on anterior cruciate ligament injuries.  This increased focus over the last month mainly due to A.C.L., LLC’s deep desire to do something to dramatically impact this trend on a global scale.  That comes through education and research & development of products that can be scaled in a way that can profoundly impact these injuries, improve athletic performance and protect the future joint health of our young (and old) athletes.  It is also partly due to the increase in public awareness of the injury and, as our latest series of articles pointed out, the reported increased number of ACL injuries in both professional sports as well as in youth athletics.  This has led to an increase research focus in this area.  Over the course of the last 10 years, there has also been a steady increase in the research related to ACL injuries and how to prevent them.  This topic has received a lot of research attention due to the cost of the injury, the short and long term effects on performance and future joint health.  In 2013 alone there was just over 900 articles published in peer reviewed journals related to the ACL.  As huge of an increase as that is, in 2014 we are on pace to have well over 1800 articles published in peer reviewed journals related to the ACL.  Yet, injury rates continue to rise!


In our previous article, we cited a study done in NY that showed a rise in ACL injury rates among youth over the last 20 years.  Sadly, if these young athletes have an ACL injury and undergo reconstruction, the research is not much better.  According to a paper published in the 2014 issue of the American Journal of Sports Medicine, Webster et al looked at whether or not younger patients are at increased risk for graft rupture or contralateral limb injury after ACL reconstruction.  Here 561 patients who underwent ACL reconstruction with a minimum 3-year follow-up were questioned about the incidence of ACL graft rupture, contralateral ACL injury, family history of ACL injury and current activity level.  What they found was that 4.5% had a graft rupture and 7.5% had contralateral injury.  The highest incidence of further ACL injury occurred in patients younger than 20 years at the time of surgery.  In this group, 29% sustained subsequent injury and odds for sustaining ACL graft rupture or contralateral injury increased 6 and 3 fold respectively for patient less than 20 years of age.  Returning to cutting/pivoting sports increased odds of graft rupture by factor of 3.9 and contralateral rupture by a factor of 5.  Despite what we know, why are rates still so high?
With the abundance of research, comes a better understanding of the factors leading to injury, what surgical interventions are best, what interventions should be done post operatively, what preventative programs work and more importantly how to assess athletes to determine those at risk.  It is easy if you have access to a $300,000 biomechanics lab and have hours and hours of time to crunch the data.  But reality is most athletes can’t afford, most don’t have access to or have the time needed to have this level of examination performed.  But, according to the research, this may not be necessary. 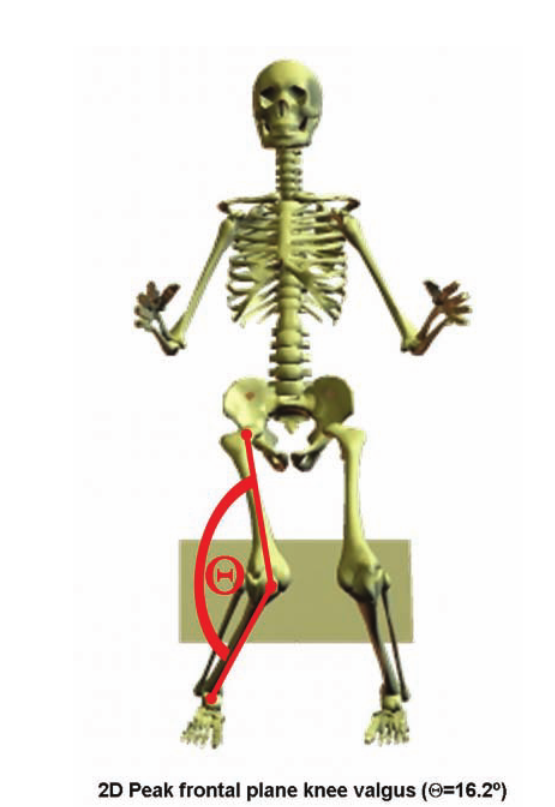 In 2010, Paterno et al published a paper in the American Journal of Sports Medicine that looked at biomechanical measures during landing and postural stability that may predict risk for a second ACL injury following reconstruction.   In this study, fifty six athletes underwent biomechanical screening after ACLR using a 3D motion analysis system.  During the analysis, the athletes performed a vertical jump maneuver and postural stability assessment.  Each subject was followed for 12 months for occurrence of a second anterior cruciate ligament injury.  What they found was that 13 of the subjects suffered a subsequent ACL injury.  The transverse plane kinetics and frontal plane kinematics during landing and sagittal plane moments at landing and deficits in postural stability predicted 2nd ACL injury in this population with a high degree of sensitivity (.92) and specificity (.88).  Specific predictive parameters included an increase in total frontal plane (valgus moment), greater asymmetry in internal knee extensor moment and a deficit in single leg postural stability.
One of the most interesting findings in this study was embedded in the authors’ results section.  Here they stated that 2-dimensional assessment of frontal plane motion could identify a risk factor for future ACL injury with a high degree of sensitivity.   Due to the fact that frontal plane knee motion is a representation of hip abduction, hip rotation and knee abduction, motion seen and identified in this plane, then capturing with 2D technology could be used to predict risk.  The authors further state that the larger the magnitude of this motion seen in the frontal plane may be correlated to increased risk for these types of injuries. 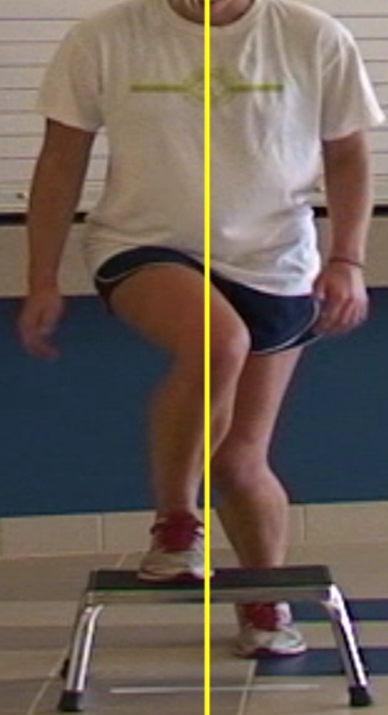 In a recent study by Stearns et al published in the 2014 American Journal of Sports Medicine, the authors looked at the influence of hip focused training program on lower extremity biomechanics during drop jump task.  In this study, twenty one recreationally active women (18-25 years of age) participated in a 4 week training program consisting of hip focused plyometric and balance perturbation exercises.  Exercise bouts were performed 3 times per week for 30 minute sessions.  What they found was after training, the subjects demonstrated significantly greater maximum isometric strength of the hip extensors and hip adductions.  Subjects also landed with significantly greater peak knee flexion, hip flexion and had lower knee/hip extensor moment ratios.  All of these factors are important for reducing risk.  But what they also found was a significantly lower peak knee abduction angle demonstrated (in the frontal plane).  In the results section, the authors report that reductions in the frontal plane motion at the knee resulted in significantly lower knee adduction moments which is consistent with reduced risk for ACL injury.  So, if motions like the ones captured in this photo with 2D technology were reduced, then risk for ACL injury would also be reduced.
If this is the case, with the abundance of low cost 2D technology available, then this could be used as an assessment for injury risk.  The challenge is there are several factors that can lead to these pathological movement patterns.  How do you assess them in a way that systematically leads, through a progressive elimination of causative factors, to the “root cause” of the pathological movement patterns demonstrated in each individual athlete?  Is there a way to do that using technology that is reliable, valid, efficient, and sensitive to change?
Stay tuned!  A.C.L., LLC is doing some great things in this area to Build Athletes to Perform…Build Athletes to Last!™
About the author:  Trent Nessler, PT, DPT, MPT.  Trent is a practicing physical therapist with 15 years in sports medicine and orthopedics.  He has a bachelors in exercise physiology, masters in physical therapy and doctorate in physical therapy with focus in biomechanics and motor learning.  He is the founder/developer of the Dynamic Movement Assessment™, Fatigue Dynamic Movement Assessment™ and author of a textbook “Dynamic Movement Assessment™: Prevent Injury and Enhance Performance”.  Trent is also associate editor of the International Journal of Athletic Therapy and Training, Member of the USA Cheer Safety Council and
Posted by Dr. Trent Nessler at 4:00 AM