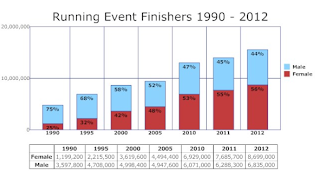 According to the U.S. Census Bureau, there are over 311 million people in the United States.  Determining what percentage of the American population that runs is difficult to do and numbers vary drastically based on your source and if you look at recreational or those that participate in organized events.  This is why, numbers range from as low as 20% to as high as 40% of Americans run recreationally.  However, if you just look at organized running events (marathons and half-marathons), these numbers are much easier to track.  According to those numbers, we have seen a drastic increase in the percentage of people who run.  According to Running USA, there has been a drastic increase in percentage of people who run events throughout the US from 1990 to 2012.  In 2012 over 15.5M men and women participated in running events throughout the US.  With all these people running, we have also seen a dramatic increase in running related injuries.  Whether you are a recreational runner, marathon or triathlete, football or soccer player or in the military, reducing your risk for running injuries in essential to your long term joint health and ability to remain active in your sport.  As such, we will be doing a three part series on running injury prevention.   Why?

But is preventing running injuries all about forefoot and rearfoot strike?  To answer that question, you must first look at the entire lower kinetic chain and what the research shows us.  For our discussions here, the lower kinetic chain is anything from the pecs down to the foot and ankle.  Since stability along this entire region can alter force production (performance) and attenuation (injury), it is important to look at the chain in its entirety.  Although the type of foot strike does alter ground reaction forces and alter force attenuation along the entire lower kinetic chain, it may only be a part of the problem.  For example, it is well known that hip weakness can also increase ground reaction forces along the kinetic chain.  For example, we know from Weist et al, research in 2004 that prolonged running results in fatigue in the lower kinetic chain.  This results in decreased maximal volitional contraction of the gastrocnemius, the gluteus medius and gluteus maximus.  This decrease in maximal volitional contraction of these key muscles adds to:
·        Increase metatarsal pressures – pressures on the bones of the forefoot
·        Increased rear foot pronation
·        Increased maximal volitional contraction of the hamstring

Seeing which muscles fatigue first gives us an indication of their role in gait and how vital that role is.  According to the study, with prolonged running the gluteus maximus fatigues and since this is a powerful hip extensor then hamstrings must be recruited in order to assist in hip extension.  Could lack of gluteus maximus endurance be a “root cause” for hamstring injuries? 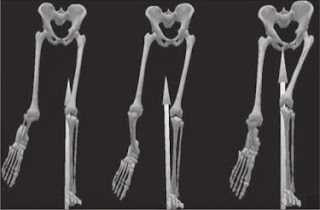 We also know that alterations in stability of the hip, for example, can result in increased hip adduction, femoral internal rotation and pronation at the foot.  In 2011 study in the American Journal of Sports Medicine, Earl et al showed that a strengthening and proprioceptive training to the hip significantly reduced symptoms associated with PFPS.  This same study also showed a decrease in peak internal joint moments at the rearfoot, knee and hip.  At the foot, the net result is increased pronation resulting in increased ground reaction forces along the plantar fascia and metatarsals.  We know hip weakness can lead to patellofemoral pain syndrome in runners but could it also result in plantar fasciitis and metatarsal stress fractures?
Although that connection is not as clear, what is clear is that to prevent these injuries, you must look at the entire kinetic chain.  If you only look at the hip or only look at the foot, you are not getting the full picture of where the chain is breaking down.  To also completely understand how the kinetic chain functions, we must understand that it functions very differently when it fatigues.  As such, having a better idea of how fatigue impacts the kinetic chain can give us a clearer indication of how we approach our preventative techniques.  In our next blog, we will discuss fatigue and how it impacts the lower kinetic chain.