Whether you are a long distance runner, sprinter, soccer player or football player, running is most likely a part of your sport and your training.  Therefore, prevention of common orthopedic injuries associated with running is important in order to ensure athletes perform at optimal levels and keep off the disabled list.  In our last article we discussed some of the most common orthopedic injuries that occur with running and touched on some of the current research with.  This article also highlighted the complexity of the issue.

The complexity of the issue does not come from diagnosing the problem (plantar fasciitis as an example) but rather determining the “root cause” of the plantar fasciitis.  Determining the source of the pain is fairly simply but determining why did the plantar fascia on the right start hurting and not the left is often the more difficult challenge.  If we understand the “root cause” then we can develop interventions that are truly impactful to injury rates.  For example, is that plantar fasciitis the result of improper shoe wear, poor running technique, over training or some breakdown in the kinetic chain?  In many cases, it may be a combination of one or more of the above.  For our purposes and the purposes of this article we are going to only address the issues with the kinetic chain.  That is not meant to negate the impact of the others but rather to have a more focused discussion on one component.  As mentioned in the previous article (Running With Pain?), the term lower kinetic chain will refer to anything from the pecs down to the foot. 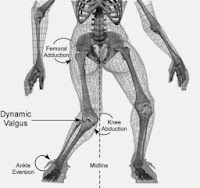 The reason we are focusing our discussion on the lower kinetic chain is because of its complexity.  For the lower kinetic chain to function optimally, it requires the proper interaction of the neurological, muscular and skeletal system.  It is this “proper” interaction that allows for movement that is:
·        Productive – allows to accomplish task
·        Efficient – decreased number of Kcals per unit of force produced
·        Loads tissues in anatomically designed fashion
·        Decreases ground reaction forces.
Breakdown any portion of the lower kinetic chain can add to significant increases in ground reaction forces (GRF).  Increase in GRF means the tissues are under more stress and therefore more likely to sustain an injury.  In a 2009 study by Winiarksi et al, they found that GRFs are significantly higher in those who had minor variations in gait and center of gravity during gait.  In this study, they looked at those who were post ACL reconstruction with gait deviations and found that the GRF typically experienced with human gait went from 1.1x body weight to 5-7x body weight with these altered gait patterns.  In this example, one might assume the gait deviation is the “root cause” when in fact a lack of range of motion of the hip, knee or ankle, weakness in the kinetic chain or lack of proprioception is the more likely contributing factor to the gait deviation.  In this example, the gait deviation is the symptom of the problem.  So how do you determine the problem?
First we have to know where to look.  Until ~10 years ago, clinicians never looked above the foot/ankle for the root cause of foot/ankle problems (like plantar fasciitis).  However, the work by Weist et al, in 2004 clearly showed that fatigue of the hip can lead to increased plantar and metatarsal pressures.  This not only highlights the importance of these muscles during running gait but also what happens when they are not functioning optimally.  The increase in pressures (GRF) seen can result in a plethora of foot/ankle problems.  This same study showed increase in pronation at the foot with fatigue of the hip and gastrocnemius.  Since hip fatigue is contributing to this pronation, if we only looked at the foot/ankle and put the patient in an orthotic, then we are only addressing a small part of the “root cause”.
When looking at the most common orthopedic injuries associated with running, we find that most are often associated with the same mechanics we see with ACL injuries.  In 2000, Fredericson et al showed that hip weakness was commonly associated with IT band friction syndrome in long distance runners.  In 2003, Ireland et al showed that lack of hip strength was commonly associated with patellofemoral pain in active females (including runners).  These studies as well as others have identified the same movement patterns that are associated with ACL injury risk also put runners at greater risk for orthopedic injuries of the entire lower kinetic chain.  Knowing this and since there is such an abundance of ACL literature, we can look at ACL fatigue studies to see how this may correlate to running.  Why look at fatigue? 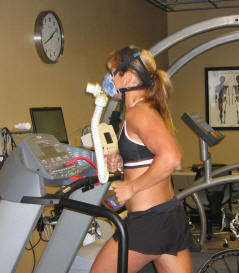 We evaluating runners in the initial phases of the injury, we often find that a significant portion complain of symptoms after running a certain distance or time versus pain at onset.  Clinically, this leads us to suspect some endurance component that may be leading to the problem.  Yet, so often when we evaluate, we do this in a rested state and often in non-weight bearing or open kinetic chain situations.
So what do the fatigue studies tell us and how does that change the way we assess?  We know from studies as far back as 1997 by Lattanzio et al that fatigue impacts proprioception.  This is important for runners or athletes as most start to complain of pain later in the run or game as fatigue starts to set in.  Fatigue in hip, knee and/or ankle proprioception results increased movement at the joint during high load activities which can lead to injury.   Burke et al in a 2000 study question whether this is due to fatigue at the muscle spindle level or elsewhere.  Although the answer is not completely clear, the results by Miura et al in 2004 indicate that endurance training alone does not significantly improve mechanics evident with fatigue.

In looking at ACL fatigue studies, whether it is Chappell et al in 2005 or Kernozek et al in 2008 or Hart et al in 2009, it is evident that proprioception and various components of the kinetic chain, if weakened or lack endurance, can lead to altered mechanics along the entire kinetic chain.  Therefore, it would make sense that when assessing someone who is complaining of pain later in the game or later in the run then assessing them in a fatigued state would give a better indication of the “root cause”.  Based on all the above studies, we know their mechanics will look dramatically different when they are fatigued and hence when they are having pain.  If working with a runner, then simply having them run prior to the assessment will give a clearer indication of how they look when they experience pain.  When dealing with a multidirectional athlete (soccer, football etc.), it is important to fatigue them in a way that mimics their sport, multidirectionally.  Quammen et al showed in 2012 that using a multidirectional fatigue protocol (Functional Agility Short Term Fatigue Protocol) was more effective than the traditional fatigue protocol (Slow Linear Oxidative Fatigue Protocol) at highlighting poor mechanics of the lower kinetic chain.
So once we fatigue the athlete, how do we assess?  That will be the focus of third and final article in this series.
Posted by Dr. Trent Nessler at 4:00 AM