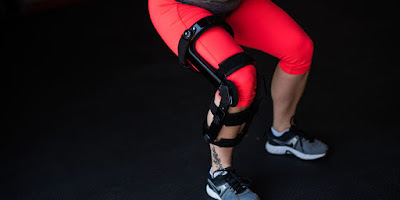 Last week, we continued our discussion on measuring kinesiophobia in our athletes and certain patient reported outcome (PRO) tools we could use to do this.  We specifically discussed several studies by Webster et al related to the ACL-RSI (Anterior Cruciate Ligament Return to Sport After Injury).  This is a PRO tool that is used to assess psychological factors which put the athlete at risk for injury with Return to Sport (RTSport).  The ACL-RSI is a great tool, however the one that I use the most (exclusively) is the TSK-11.  This decision was based on the Paterno et al Sport Health 2018 study, which showed that poor performance on this PRO (TSK-11) is highly associated with increased risk for re-injury with RTSport.  Athletes scoring >19 points on this test were 13xs more likely to get re-injured with RTSport.  We also know from the Noehren et al Orhto J Sport Med 2018 study that athletes who perform poorly on the TSK-11 also alter their movement patterns.  This study showed athletes tend to unload the effected side when kinesiophobia is high.  This is very similar to what we see on the TSK-11 and when we measure movement, specifically single limb performance.

However, this is a frequent question that I get.  Why do you use the TSK-11 over the ACL-RSI?  Again, I think both of these are great.  However, I want to specifically look at psychological factors that I think have an impact on movement which I think equates to risk of re-injury as well as impacting performance of the athlete with RTSport.  The ACL-RSI has not been shown to be associated with movement patterns we know put athletes at risk or performance measures.  A recent study further confirmed, for what I am attempting to assess, that the TSK-11 is the preferred tool over the ACL-RSI.

O'Connor et al Am J Sports Med 2020 looked at the relationship between the ACL-RSI scores and measures of strength and power scores after ACLR in athletes.

Methods:
This study recruited 452 male athletes who underwent a primary (first time) ACLR.  Subjects all had surgery at the same practice by two orthopedic physicians specializing in ACLR.  Athletes ranged in age from 18-35, had either a patellar tendon graft or hamstrings graft and planned on returning to sport.  All subjects were tested at 9 months and completed an ACL-RSI prior to testing.

Prior to testing, each completed a warm up consisting of 2 minute jog, 5 body weight squats, 2
submaximal and 3 maximal single leg counter jumps.


Results and Discussion:
ACL-RSI scores had little or no relationship with athlete's strength and power measures.  There was no meaningful difference in strength and power between athletes that had low scores on ACL-RSI and those that had high scores on the ACL-RSI.  The authors suggest that psychological recovery and physical recovery after ACL reconstruction are different constructs and each should be measured separately.

This is where I could not disagree more.  Based on clinical experience and what we are seeing when we "objectively" measure movement is that these two are highly correlated.  Faulty movement has a negative impact on performance (decrease in power output and strength) and when we improve strength of the entire kinetic chain (from the foot to the core), we see an improvement in movement and an improvement in power output.  We also know these movements are directly associated with injury risk.  So, is it that these two things operate completely separately or is it that this particular PRO tool is not measuring it well.  Based on what we see, I would say more the later.

So, to answer the question, this is one more reason that I tend to use the TSK-11 over the ACL-RSI.  It is more tightly associated with injury risk (with RTSport) and movement.  Eventually, I think we will see an association as well with power output.  I hope you have enjoyed this series and stay tuned as we continue to look at how we can impact both performance and injury prevention.  If you enjoyed, make sure to keep up with me on Instagram @bjjpt_acl_guy, twitter @ACL_prevention and on the web at www.drtrentnessler.com where I post the most up to date research and information.  #ViPerformAMI #ACLPlayItSafe

Dr. Nessler is a practicing physical therapist with over 20 years sports medicine clinical experience and a nationally recognized expert in the area of athletic movement assessment and ACL injury prevention.  He is the founder | developer of the ViPerform AMI, ViPerform AMI RTSport, ACL Play It Safe Program, Run Safe Program and author of a college textbook on this subject.  Trent has performed >5000 athletic movement assessments in the US and abroad and speaks nationally and internationally on the subject.  He serves as the National Director of Sports Innovation for Select Medical and serves as movement and injury prevention consultant for numerous colleges and professional teams.  Trent is also a competitive athlete and purple belt in Brazilian Jiu Jitsu.