Over the course of this blog, I have attempted to present a lot of research on injury prevention.  Although the majority of this has focused on mitigating risk for anterior cruciate ligament (ACL) injuries, it has also extended to all lower kinetic chain injuries from the foot to the spine.  You have also heard me talk about an athletic movement assessment (ViPerform AMI) I created to assess these risk factors using a 3D wearable sensor (called dorsaVi).  This product was commercially released in 2017 and has now been used to assess over 18,000 athletes across the US.

Part of the intention of developing this was to provide clinicians, physicians and strength coaches with an efficient and reliable tool to assess biomechanical factors that put an athlete at risk for injury and which negatively impact performance.  When used in pre-season physicals, the hope is that this information could be used to guide seasonal movement training which would improve results on this test.  This is not intended as a sales blog but more what happens when you collect mass movement data utilizing technology.  With over 1,000 data points per assessment, we now have over 18,000,000 variables related to athletic movement.  What this allows us to do is identify trends in athletes that we may not see in the literature for some time.

First, I would like to give a shout out to a colleague of mine who has been using this system in DI athletics since its first prototype in 2016.  Her team just published their first paper.  Garner et al Int J Kines Sport Sci 2020 used the ViPerform AMI to manage risk of injury in a strength and conditioning program in DI volleyball players. 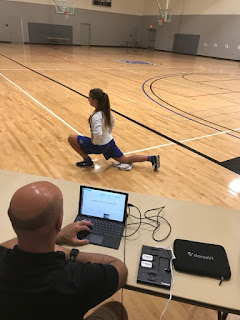 Methods:  In this study, the authors performed an assessment on the volleyball players during pre-season physicals.  The results of the test were then used to develop specific exercise program for the athletes that they would perform 3x/wk for the entire volleyball season.  The athletes were tracked all season long and injury rates were compared to EMR (electronic medical record) data for the five previous seasons.  Although this is not the ideal way, when you are working with a team, it is hard to use one group as your experimental group and the other as your control.  Most teams and coaches won’t go for this.  Problem is, if there is a change in other variables season to season (athletic training staff, strength staff, strength programming, replacement of the court, etc) this can have an impact on the injury rates.  This was identified and no other variables were changed season to season with the exception of the assessment and specific assignment to a movement program based on the results.

Results:  Compliance with the program was greater than 90% with performance of the program at the conclusion of practice 3x/wk.  When comparing to the previous 5 years of EMR for non-contact injuries, what the results showed was a 67% reduction in hip injuries, 37% reduction in knee injuries, 50% reduction in lower leg injuries and 67% reduction in thigh injuries.  There were no recorded ACL injuries for the entire season for the first time in 5 years (this was not statistically significant since the recorded ACL injuries for prior years was 1-2 per season).  In addition, as a result of the intervention, there was a >40% reduction in health care spend for the team that year (this includes MD visits, x-rays, MRI, surgery and physical therapy).

Although this is the first paper, there are several studies and papers in development.  But this is meeting our first goal which was to provide clinicians (PTs and ATCs), physicians and strength coaches with tool to identify those at risk and use that information to make meaningful changes to their program to impact.  In addition this this goal, another goal of this system was for it to be a venue by which we could collect mass data as it relates to athletic movement.  Collecting mass movement data (>18M variables on >18K athletes) in this way has never been done before.  By vetting this data, this allows us to identify trends in movement and risk prior to this being identified in research.  The key is not to just identify it but more importantly determine what do you do about it.

An example is something we see in single limb (SL) testing.  Obviously one of the things we are looking for in SL testing is how stable is your knee in the frontal plane.  Does your knee fall in towards mid-line (or valgus collapse) and does it do that at a high rate of speed?  We know this is a risk factor and is well documented in the research.  It is one of the key factors we measure.  However, there are some athletes that are good at controlling this motion of the knee.  However, when they do, some of them will lose control higher up the kinetic chain at the hip.  We call this a loss of pelvic control and it can be represented in several different ways.

Trendelenburg – in a single leg squatting position, this movement occurs when the hip on the opposite side you are standing on falls.  So, if the athlete is doing a left single leg squat (as depicted here) the right hip will fall.  This is an indication of weakness in the left gluteus medius.  If this muscle has full strength, it would contract and prevent the right hip from falling.

In addition to the abnormal forces that are created along the entire kinetic chain, it also tends to lend to an increase in loss of balance during single leg activities.  In addition, the dropping of the hip creates a stress on the right left hip joint, left sacroiliac joint and lumbar spine.  This can lead to a plethora of hip and low back problems during athletics.  Aside from injury risk, this also has a huge impact on athletic performance.  There is a negative impact on maximal power production and agility.

Retro-trendelenburg – in a single leg squatting position, this movement occurs when the athlete shifts their weight over the stance leg.  So, if the athlete is doing a right single leg squat (as depicted here) they shift their weight over the right hip.  This is an indication of weakness in the right gluteus medius on the left side.  The reason this is done, is this position creates stability by placing the femoral head deeper in the socket (acetabulum).  This creates boney stability so the glute does not have to work as hard.  If this muscle has full strength, it would contract and the athlete would remain more upright.

In addition to the abnormal forces that are created along the entire kinetic chain, it also tends to lend to an increase in loss of balance during single leg activities.  In this scenario, when the athlete (depicted here) do single leg hopping activities, you will see her migrate to the right as the center of mass is pulling in that direction.  This puts a lot of stress on the hip joint and lumbar spine facets on the right side.  In addition, this has a negative impact on maximal force production and agility.

Cork-Screw – one of the most devastating movements we see in the hip is the cork screw. During a single leg squatting, this movement occurs when the athlete’s hip drops and rotates.  If the athlete is doing a right single leg squat (as depicted here) the left hip drops and there is rotation at the right hip.  This is easy to recognize by what the left foot (in this case) is doing.  What you see is the left foot cross mid-line and appears on the opposite side of the right leg.  This indicates moderate to severe weakness of the right gluteus medius as it is failing through its full range of motion.  With dropping of the pelvis and the rotation that occurs at the right hip, this puts a tremendous amount of shear stress on the labrum of the hip and can lead to hip pathology.  This can also lead to problems in the SI joint and low back pain.

In addition to the abnormal forces that are created along the entire kinetic chain, it also tends to lend to an increase in loss of balance during single leg activities.  In this scenario, when the athlete (depicted here) do single leg hopping activities, you will tend to lose his balance a lot and as a corrective strategy, often create a significant amount of rotation at the knee.  Additionally there is a negative impact on maximal force production and agility.

Keeping in mind, this is a trend we have seen in collecting movement data on 18k+ athletes but has also something we have seen throughout the years of development.  Some might say, well this is not proven because I have not seen that in the literature.  That is, until now.

Next week, we will start looking at a series of studies that further confirm how we should be looking at movement and more importantly, what we should be doing about it.  If you enjoy this blog, please share with your colleagues, athletes and training partners and please be sure to follow us on instagrm @ bjjpt_acl_guy and twitter @acl_prevention.  Train hard and stay well.  #ViPerformAMI #ACLPlayItSafe