How Will Your NFL Team Perform? - Know Their Injury Rates - Part II 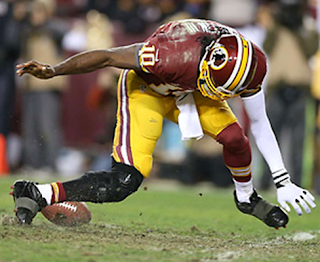 Last week we talked about the Read study and some of the implications that an ACL injury can have on an athletes performance after RTPlay.  This week, we are going to dissect this a little more the investigate what this means to the team and to the player.

Players starting in less games.  One thing the authors spoke about was that players returning to sport post ACLR started less games following RTPlay.  This can come from multiple factors including a coaching decision, a medical decision or player decision.

Several recent studies have looked at kinesiophobia a little closer.  Noehren et al Ortho J Sport Med 2018, looked at the impact that kinesiophobia (fear of movement) has on loading patterns of the lower extremity during a drop vertical jump.  What the authors found was that athletes who reported high levels of kinesiophobia tend to unload their involved limb during landing.  This can have a significant impact on loads on the non-involved side (increasing risk for injury on that side) and strength development on the involved side.  If the athlete is shifting their weight over to the non-involved leg, this means they will carry this over to functional tasks and strength training.  This will add to a muscle imbalance on the involved versus non-involved side.  The asymmetry that is created sets an athlete up for future injury but also negatively impacts performance. 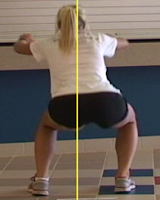 One of the things we see in athletes that report high levels of kinesiophobia is what we term a lateral shift.  As depicted in this picture here, when we evaluate a squatting motion in an athlete who reports high levels of kinesiophobia, what we see is that athlete then shifts their weight off the involved side and more to the uninvolved side.  If this is not corrected, then this athlete will carry this over to all their functional activities (sitting down, getting off bed, getting in/out of car) and during their training.  The same lateral shift that is depicted in this picture here is carried over to when the athlete gets under a loaded bar and does squats.  This further reinforces the asymmetry and motor and muscle sequencing that we don't to see.

Paterno et al Sport Health 2018, looked further at this concept of kinesiophobia and found some interesting results. In this particular study, they looked at athletes that have been cleared for RTPlay following an ACL reconstruction.  Each athlete in this study:


What the authors found was high scores on the TSK-11 (high incidence of fear) were correlated to athletes who were:
As a practitioner, one thing this brings up is it the fear that drives these results or the results that create some subconscious awareness of the limitation which drives the fear?  We don't really know that answer but what we do know is that there are certain personality types that tend to demonstrate these fearful tendencies more than others.  As such, we must be able to identify them early on in the process and do everything we can not to feed into it.  At the same time, create exercise progressions which help to overcome. 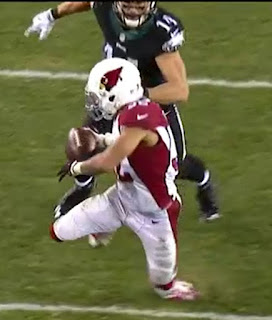 Considering the previously discussed Read study and impact on the individuals performance, what is the overall impact to the team and does this impact team performance.  Keeping in mind what this study showed us, one of the things we know is that the athletes that did return to play were the better defensive players prior to their injury.  That said, this study also clearly shows they did not return to the same level of play.  For defensive players, one of the game performance measures is number of solo tackles.  The number of solo tackles dropped dramatically and brought their individual ranking down from a star player to an average player.  Taking star players out of the game can and will have a dramatic impact on overall team performance in individual games as well as overall seasonal performance.

On a personal level, what is the impact to that athlete?  This is obviously the individual that is impacted the most.  NFL players know this impact and it is one reason that in 2014, 2015 and 2016, knee injuries were ranked the #1 concern among NFL football players in the NFL Players’ Association.  This is above concussion or any other injury.  Why?  Because they know how much this impacts earning potential.  This has a direct impact on the NFL player’s earning potential in 2 ways.  If their contract is up for negotiation, this is going to be based on prior year’s performance.  If they are starting in less games and making less solo tackles, then they do not have as strong negotiating power as they may have had previously.  In addition, what this study shows and what the athletes know, is that their professional football career is cut short.  Although this study shows an impact, what industry experts say is that their professional career may be reduced by 3-4 years.  On a multimillion dollar contract, that is a lot of potential income that they lose out on.

So why is this study so important?  ACL injuries are common in the NFL.  How common?    Let’s look at the numbers by season.
Over four seasons that is 202 ACL injuries.  If you look at the overall cost of those injuries, you must look at time loss, ACLR cost, rehab cost, positional replacement costs, emotional capital and impact to team performance.  Industry experts put this cost at ~$1M/player.  Over 4 seasons, that is $202M in injuries.

Sadly, over 73% of those are non-contact in orientation.  Studies suggest that you can reduce non-contact ACL injuries by as much as 80% if those athletes are properly identified and put on an appropriate program.  So over four seasons, that is a potential $118M cost savings if they had been identified and trained appropriately. 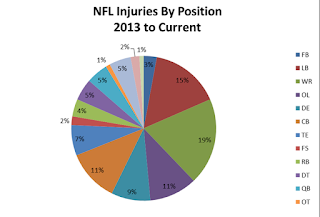 So why is this not being done?  One is time.  How do you do that efficiently?  Here is an interesting fact.  66% of all NFL ACL injuries are associated with 5 positions.


What does it take to make a change?  First and sadly, you need to tie it to performance.  How does this impact athletic performance, team performance and revenues.  The above study highlights the impact this will have to the individual performance of the player but also the impact this will have to the team’s overall performance.  Secondly, we need to know we can somehow efficiently identify those at risk.  With the advent of wearable sensor technology and the knowledge that 66% are associated with 5 key positions, then we now have an efficient manner to address.  Finally, having a solution.  Once those at risk have been identified, how do we change that?  There are multiple programs out there that can efficiently impact these pathokinematics and improve the movements that put athletes at risk.

Insanity - To do the same thing over and over and expect a different outcome.  Is it time for the insanity to be over or are we going to continue what we have always done and expect a different result?  I chose the former.  Next week, we will close out this discussion with talking about how do we determine RTplay?  If you are enjoying our blog, please share it and follow us on twitter @ACL_prevention and on Instagram at @Bjjpt_acl_guy