If Your Going To Do It, Do It Right - Part II

Last week, we started our discussion about focusing on technique with exercise.  We discussed how training bad technique will equate to bad performance and reduce the impact we will have on injury risk.  So, before we get into any specific movements, let' look at a study that actually shows us why we talk about some of what we do.

In this particular study, the authors did a 12 year prospective study looking at the impact of hip focused injury prevention program had on female basketball players.

This study was a prospective study conducted for 12 years on college female basketball players.  Incident rates of ACL injuries were collected in the first 4 years (observational period).  After the observation period, a hip focused ACL injury prevention program was implemented for 8 years (intervention period).    This study included a total 309 players who were 19.6 years old (+/- 1.2 years) that were tracked for 4 years and compared to 448 players who were 19.6 years old (+/- 1.1 years) that participated in the intervention period.  Athletic exposures (AEs), ACL numbers and mechanism of injury (MOI), relative risk (RR), absolute risk reduction (ARR), numbers needed to be treated (NNT) and compliance was tracked and analyzed.

During the course of this program, athletes performed the following exercises with various progressions within each exercise. 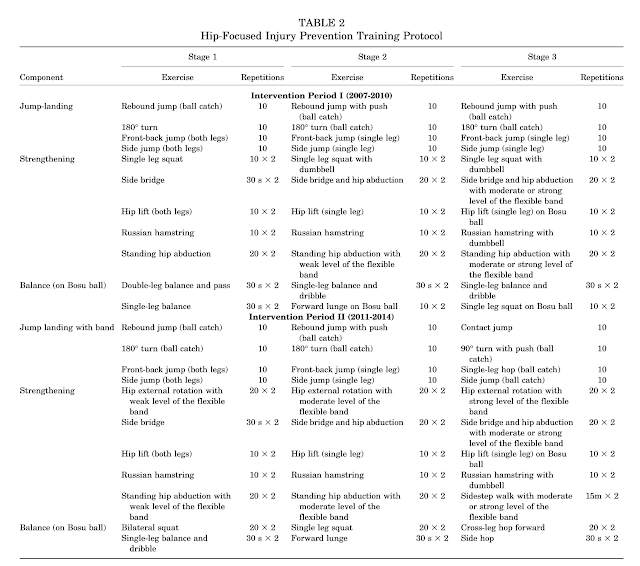 Athletes participating in the program were progressed or upgraded to the next level 3 times during the season.

It is apparent from this study that a hip focused program demonstrates significant reduction in non-contact ACL injuries in women's collegiate basketball.  Although the authors describe this as a hip-focused program, a further analysis of the program  reveals a program that is focusing on the core and hips.   Prevention of the primary non-contact ACL injury is critical to an athlete's future joint health as well as their future risk.  Wiggins et al - Am J Sport Med 2016 showed that 1 in 4 young athletes who tear their ACL will retear their ACL at some point in their athletic career.  Studies are also showing (Lopes et al - Am J Sport Med 2017), programs like this have a direct impact on the biomechanical factors associated with risk.  Further, Riddler et al - AM J Sports Med 2017 showed hip strength not only puts an athlete at risk for ACL injury, but also puts them at risk for other lower kinetic chain injuries.

Although the injury prevention aspects of this are great and much needed, we need to be able to message this so that athletes, coaches and parents also see the performance aspects of this.  We know from previous Rugg studies (Rugg et al - AM J  Sport Med 2014) that if an athlete injuries their knee they are at an 8 fold increased risk of injuring their knee during college athletics.  This means they will not be able to participate in sport and will not be contributing to the team's overall performance.  If this is a high value player, this can have a large impact on the team's overall seasonal performance.  In addition, Mia et al Am J Sports Med 2017 showed that NFL football players who tear their ACL have a decrease performance for up to two years after the injury and shorten their career by an average of two years.  So, again the prevention of the primary ACL injury is critical. 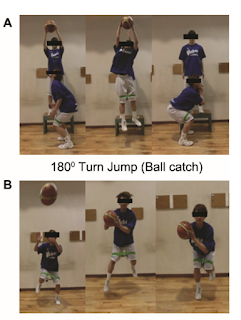 Looking at some of the specific exercises, it become apparent why technique is vital.  In the 180 degree turn and jump (Diagram A), the athlete has a band around the knees so they have to actively reduce the valgus motion that often happens with this motion and which adds to increased risk.  In the lateral side step with a ball catch, they again have a band around the knees which the athlete has to actively reduce the valgus.  In either of these exercises, if the athlete were to perform these with repeating the valgus motion at the knee with each rep, then they would simply be reinforcing the bad movement patterns, bad motor patterns and the net result would be this is the movement they would go to when in sport.

Interestingly enough, when you look at a lot of hte exercises that are used in this reference study, they are very similar to those that are used in the ACL Play It Safe Program.  As such, we are seeing a direct correlation with athletes who have a low compliance with the program itself or a low compliance with the technique end up having less than optimal results.  These three exercises are critical and a great example of why it is important to have proper technique.  In exercise A (sidelying clam with a band) you see the athlete's hip pointing straight forward while externally rotating at the hip.  This is a great exercise for the gmed.  However, if the athlete rolls their hip back during this exercise (which is a minor compensation and sometimes hard to see), this will shorten the Gmed and sigificantly decrease the gmed activation (Willcox et al J Ortho Sports Phy Ther 2013). 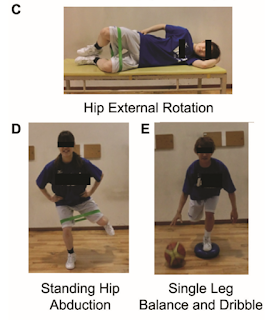 In both the standing hip adduction and single leg balance with dribble, it is imperative that the athlete is controlling not only the magnitude of valgus that occurs at the knee but also speed at which that occurs.  According to Nordin & Frankel (Basic Biomechanics of the Musculoskeletal System: 3rd Edition) joint force is determined by both the magnitude and speed at which the motion is imparted.  As such, in training, it is important to make sure the athlete focuses on controlling both of these factors.  If not, then the pattern that is trained is what the athlete will revert to when they are in competition or in practice.

Technique is everything.  Next week, we will look at some specific movements or key movements for athletes to focus on controlling.  Help us ring in 2018 right by spreading the word and helping to prevent athletic injuries. #ViPerformAMI #ACLPlayItSafe #ResearchThatWorks