Last week we concluded with looking at the squatting motion, what deviations we would see and how we might address those.  What we did not discuss is how to score this movement. 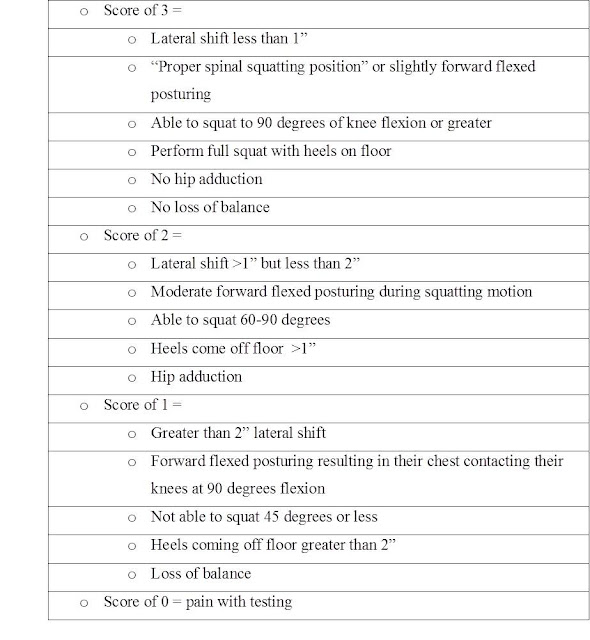 For increased sensitivity, scoring of each repetition is ideal but time consuming.

TEST #2: Single Leg Squat Test ( SLST) - The SL Squat (SLST) test assesses the athlete’s ability to perform a partial squatting motion on one leg.  Due to the fact that so much athletic activity involves single limb activity, this is a crucial test and will provide you with an idea of the athlete’s ability to stabilize his or her extremities while in motion.  This will provide a great deal of insight into potential weaknesses, tightnesses and where the athlete’s limitations are with regard to the lower extremity activities.  Performance on this test can be directly linked in particular to power generation in the lower body.

During this test, the subject stands on one leg while the other leg is bent to between 45-90 degrees.  The subject is asked to squat down to 45° and repeat the motion 10 times.  Once the subject completes 10 repetitions, he/she is then asked to perform the same test on the opposite side for 10 repetitions.  During this test, you are assessing the ability to perform the test, whether there is excessive lumbar flexion vs. knee flexion, whether there is a variance between the right and left sides, if there is adduction/internal rotation at the hip or knee and if the subject is able to stay balanced during the course of the examination. 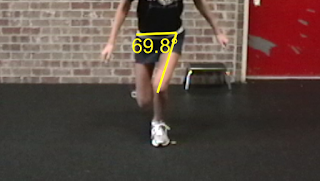 Trendelenburg/Cork screwing – if there is weakness in the hip, this will often become more pronounced in a single leg stance position.  Most often, this will present itself as a trendelenburg (as described above).  If the weakness in the hip is significant enough, then there may be a loss of control at the hip resulting in a “cork screwing” motion.

In this particular example, the subject starts to “cork screw” at the hip, resulting in significant side bending in the lumbar spine and eventually loss of balance. 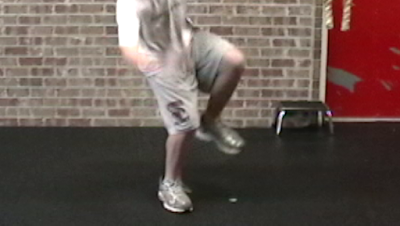 Suggested Corrective Exercise:  Due to the extent of weakness of the hip and core, these subjects do remarkably well with isolated strengthening and endurance exercise training for the gluteus medius and the core as well as a proprioceptive retraining program. 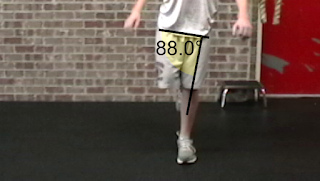 Asymmetry – as the force demands increase for the entire lower kinetic chain with this test, bilateral asymmetries become more apparent.  Using the example from above, we can see when we compare the subject’s left leg to his right, that there are notable asymmetries.    If these are left unchecked this leads to increased potential for injury on both legs.


Asymmetries can  present themselves in several ways.  This includes but is not limited to:


Asymmetries of this nature can result from poor balance, weakness or lack of stability of the proximal hip or poor proprioception.

Suggested Corrective Exercise:  If there is significant lateral shift, these subjects respond well to the squatting protocol (squat pause protocol, rapid squats, rotational lunges).  If the inability to perform this test is a result of loss of balance, then these athletes respond well to the Single Leg with Dynamic Lower Extremity Movement exercise progression.