Last week we discussed 3D technologies that are available to assess pathological movement in our athletes.  This week we will look at some 2D technologies as well as movement assessment specifically.

Most of us in the rehabilitation and sports performance setting are more familiar with 2D technologies.  Although there is a plethora of them on the market, one of the most recognized and most widely used in professional athletics is Dartfish.  In December of 1998 Dartfish was founded to develop a commercial product called SimulCam™ and other digital imaging applications for use in movement analysis and sports.  SimulCam™ technology was followed by StroMotion™ technology, which was launched in January 2001 and allowed viewing and movement analysis in much more depth.  Based on its technological know-how, Dartfish soon branched out into other growth areas such as interactive internet content enhancements and the development of cutting-edge sports training applications. Today, these technologies are widely recognized for exclusive televised broadcast footage of sporting events and breakthrough training applications for sports, education, healthcare and many other applications. 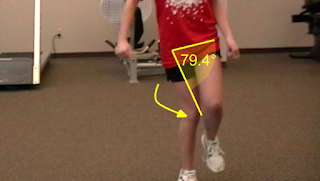 Using Dartfish technology affords users the ability to capture movement patterns and then review those movement patterns using both still pictures and video.  Dartfish also allows us to discretely, objectively measure some of the pathokinematic movement patterns that we see in the practical setting.  The ability to playback video as well as show still pictures of pathokinematics is a wonderful tool to use for patient and athlete education after measurements are made.  Since Dartfish can only provide one dimensional views of movement, accurate measurements of the components of rotation, however cannot be captured.  Although movements such as these can be visualized and described using the video captured with Dartfish software, actually quantifying these types of movements using numerical descriptors typically requires a three dimensional view, like those you can get with a Viacom multi-camera system.

Dartfish video software comes in several versions designed to meet specific needs.  Fees involve purchase of a license and depending on the version of the program cost between $1200 and $4000.  In comparison to the biomechanics lab this is fairly inexpensive, but the cost can still be prohibitive for some users, such as high school athletic programs and the like.  In a clinical and performance setting though, it is an extremely valuable tool at a reasonable price which allows objective quantification of assessment findings, easy and effective patient and athlete education, and finally, a way to measure progress after application of targeted individualized treatment and athletic improvement plans. Its multi-functionality also allows it to be used indoors and outdoors but also has some limitations.

Despite the limitations, this is a great tool to not only assess movement but can also be used as a very effective tool in educating athletes regarding pathological movement.

Over the course of the last 15 years, we have assessing movement in order to capture and quantify pathokinematic movement patterns that we know lead to certain kinds of injury and limit athletic performance.  Movement assessment is a tool that can be used in conjunction with Dartfish video software, a laptop and a small digital video camera quickly and easily in the field under all kinds of conditions.  Relatively inexpensive, these tools can be used together in the clinical setting as well   For practical use in working with athletes to prevent injury, rehabilitate, or improve sports performance both on and off the field, movement assessment in conjunction with technology is an excellent tool to capture, quantify and then analyze movement patterns.  From there it is then possible to design and develop individualized training or rehabilitation protocols that address weaknesses in the kinetic chain that can only be seen when an athlete is in motion.

Any MA should consist of at least four essential movements that have a high correlation and carryover to sport and which allow us to assess pathokinematics.  A MA also provides us with a clearer indication of the exact location of the break down of normal movement patterns.  Using Dartfish video technology or 3D technology, we can video the athlete performing the MA to capture him or her in motion.  We can then use the video and/or freeze frame the movements in order to analyze both static positions and movement angles.  We can then assign measurements to both the static positions and the motion we capture on video.  Coaches, athletic trainers, physical therapists and others who work with the athlete can then use these measurements to formulate assumptions about the underlying structures of the body that facilitate or impede his or her motion.

Finally, video footage and still pictures can be used to educate the athlete on the movement patterns he or she uses in sport and other activities, and how they might limit performance and lead to pain and/or injury.  This enables the coach, athletic trainer, or physical therapist and the athlete to begin dialogue within a common framework and understanding of where the athlete is today and where we want him or her to be in the future on these 6 essential movements.  A Corrective Exercise Program can then be designed and implemented cooperatively, (which we will discuss later), and progress can be measured periodically using the same tools.
Dr. Nessler is a practicing physical therapist with over 17 years sports medicine clinical experience and a nationally recognized expert in the area of athletic movement assessment.  He is the developer of an athletic biomechanical analysis and author of a college textbook on this subject.  He serves as the National Director of Sports Medicine for Physiotherapy Associates, is a Safety Council Member for USA Cheer National Safety Council and associate editor of the International Journal of Athletic Therapy and Training.
Posted by Dr. Trent Nessler at 4:00 AM