Last week., we looked at the impact that nutrition has on pathological movement patterns.  This week, we are going to continue to look at some additional nutritional factors impacting movement.

Caffeine has been a somewhat controversial stimulant for use in the athletic community over the years.  It is the world’s most heavily used stimulant.  In the US alone, every day the equivalent of 168 mg of coffee is consumed per person.[i]  Its use today is primarily as an ergogenic aid to improve athletic performance.  It is believed to increase energy, alertness and endurance.  There is some evidence that it also may affect reaction times and that it causes muscles to use more fat as fuel than normal, reserving glycogen stores for later stages of training.[ii]   Heart rate efficiency and oxygen and nutrient flow to the brain are also improved which obviously positively affects sports performance, according to David Robson in his article entitled “The World’s #1 Drug of Choice:  Caffeine and Its Effects” found on the BodyBuilding.com website. [iii]

Having reviewed some of the benefits of caffeine use for athletes, let’s look at a negative.  Part of the reason so many people, and athletes in particular, become dehydrated as discussed above has to do with the fact that they do not consume enough water while simultaneously taking in too much caffeine.  Since caffeine is a diuretic, it causes the body to expedite fluid loss through urination and sweat.  Therefore, for every milligram consumed, it is important to increase water/fluid consumption proportionately so that the overall fluid balance in the body is maintained.  The recommended daily dose of caffeine is 420mg/day while the average American gets between 800 and 1600 mg/day, or nearly 2-3 times the recommended dose.  However, research show that if caffeine consumption is kept within the normally recommended dosage and enough water is consumed simultaneously, an individual’s risk of heart disease is reduced by 41% in women and 56% in men[iv].

The single best indicator of hydration is the color and odor of your urine.  Too dark and pungent smells indicates dehydration.  The following chart is a great guide to use. 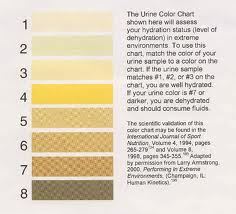 Many athletes choose to use energy boosting beverages either before, during or after exercise.  Many of these will contain some or all of the following thought to improve endurance and/or performance:

Also popular are power bars for quick energy replacement or as a meal replacement during training sessions or seasons, and energy or protein powders, also used to replace nutrients lost during extreme exercise.  Many endurance athletes in particular use fast acting carbohydrate based gels to get energy during exercise without stopping.  These include such brands as Gu, PowerBar Gel, and Hammer products.  Since carbohydrates are the body’s preferred source of energy during exercise, they need to be replenished more often in order to enable the muscles to continue to work.  Carbohydrates are broken down into sugars, absorbed and converted into energy that enables muscle contraction.  Carbohydrates can be complex or simple.  The fastest and most easily absorbed forms of carbohydrates for athletes is thought to be in the form of maltodextrin with a large amount of pentasacharides (5-sugar chain complex carbohydrate) which basically facilitates fast absorption through the stomach, and medium and long chain dextrins that raise blood glucose as fast as sucrose and faster than fructose.[v]

Any carbohydrates that are not immediately used by the body are stored in muscle tissue and the liver in the form of glycogen.  This stored glycogen is also used during exercise, especially for short bursts of activity.  Endurance sports, requiring longer and generally lower level exertion, require the body to use more fat as energy, using glycogen stores to convert the fat into fuel to feed muscles.

Caution should be used when using any of these types of products as many of them tout benefits that are simply not supported by the literature.  In addition, many contain unnatural forms of nutrients that are not readily used by the body and in some cases, could be harmful.  As mentioned above, whole natural and unprocessed food sources are always best, for anyone, especially and including athletes.

Amino acids are the building blocks of protein and have received much attention lately in the athletic community, so we felt it necessary to consider them in the body of this work.  Proteins are made up of different configurations of amino acids.  Amino acids supplements have become popular in recent years for athletes because they are rapidly absorbed into the bloodstream and are consequently more readily available for use by the body than protein from food sources or powders, which must be digested over time and then converted for use.  Amino acids are required for the growth and repair of muscle tissue and also for activities that require endurance.  Certain amino acids are particularly important and they make up the branched chain variety.  Of those, studies have shown that three are especially important for athletes:  leucine, isoleucine and valine.

A study by Carwyn Sharp and David Pearson published in the The Journal of Strength and Conditioning, showed that subjects who consumed an amino acid supplement for three weeks prior to starting a fourth week of supplementation in conjunction with high-intensity resistance training for the entire body had increased testosterone and decreased cortisol and creatine kinase blood serum levels.  This study suggests that short term amino acid supplementation high in branched chain amino acids may produce a net anabolic hormonal profile and reduce training induced increases in muscle tissue damage.[vi]  What this means to us in consideration of pathokinematics is that athletes who do not get enough amino acids in their diets may not be recovering as fast as those who do during periods of rigorous training.  When the body is unable to rebuild after extreme work or stress due to a deficiency in amino acids or in other nutrients needed for tissue and muscle repair, the athlete may become more likely to demonstrate pathokinematic movement patterns during subsequent training sessions.