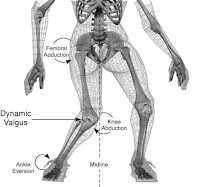 
3.     Trendelenburg (dropping of the pelvis on the contralateral side during weight bearing on the ipsilateral side).


If these occur in high loading situations or during high impact sports, the angles of the articulating surfaces can be altered, and the length tension relationships of the musculature supporting the hip/pelvis can change and/or we can see abnormal force attenuation on the tissues of the hip.  This can lead to several problems:


1.     Posterior and lateral hip issues – the hip (in general terms) is the articulation between the head of the femur and the acetabulum.  The bony architecture of this ball and socket joint allows for a tremendous amount of stability, while also allowing for some considerable range of motion in multiple planes.  There is also a significant amount of musculature that provides additional stability to the joint and which also provides motion.  The hip, like most joints in the body, is designed to be loaded in a particular fashion.  Moving outside of this “ideal” position, repetitively and under high loads, can result in tissue breakdown and degenerative changes in the joint.  With pathokinematics, we tend to see the femur in an adducted and internally rotated position along with trendelenburg at the hip.  One of these motions alone can add to increased stress to the tissues and musculature which is designed to resist these motions.  When in combination with each other and under high loads, this can cause lateral hip pain and conditions such as:


a.     Trochanteric Bursitis – the trochanteric bursa is a bursal sac located between the greater trochanter of the femur and the tensor fascia lata (TFL).  This is designed to reduce the wear and tear on the TFL from the bony prominence underneath (greater trochanter).  When there is increased tensile and compressive loads to this tissue (with hip adduction, trendelenburg and internal rotation) then the tissue will respond with inflammation.  Inflammation of this tissue is referred to as trochanteric bursitis and will present itself as lateral (or slightly posterior lateral) hip pain.


b.     Hamstring strains – the hamstrings cross two joints, the hip and the knee and are composed of three heads, the biceps femoris (lateral aspect), semimembranosus and semitendinosus (medial hamstring).  The hamstrings function to flex the knee and to aid in hip extension in a closed kinetic chain.  With excessive pathokinematics, the hamstrings are compromised in two primary ways:


i.     Increased work - with trendelenburg gait, hip adduction and internal rotation, there is often accompanying gluteus maximus (GM) weakness.  If the GM is weak, especially in athletes whose sports require rapid acceleration (sprinters, soccer players, football players, basketball players) then the hamstrings will become over active in an attempt to assist with rapid hip extension.  Since the hamstrings are picking up part of the load traditionally provided by the GM, then the hamstrings can easily become overworked resulting in hamstring pulls, tears and ruptures.


ii.     Increased load – with the same mechanisms above (trendelenburg, hip adduction, internal rotation) combined with increased force attenuation (since less force is absorbed at the foot/ankle and knee), the hamstring is put under an even higher tensile load and this can result in irritation.  If this irritation outpaces the body’s ability to repair it before the next work/loading session, this can again lead to an increased potential for hamstring pulls, tears and ruptures.

c.     Piriformis syndrome – the piriformis is a muscle deep in the hip that originates at the anterior   This muscle serves to provide some component of external rotation to the femur on the acetabulum and some component of hip abduction.  In a closed kinetic chain, this muscle is put under a tremendous tensile load when there is hip adduction, trendelenburg and internal rotation.  If these motions occur in the presence of weakness of the gluteus medius (which is a much larger muscle much more equipped to resist these motions) then the piriformis continues to attempt to resist some component of these motions without the support of the larger and more powerful muscle.  This results in the smaller piriformis muscle becoming overworked and strained.  When this muscle becomes strained, it w
ill typically present in one of the following ways:
sacrum and superior margin of the greater sciatic notch and inserts at the superior medial portion of the greater trochanter. 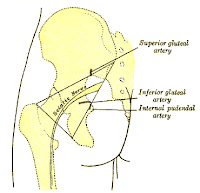 ii.     Sciatica – the sciatic nerve is a nerve that originates from L4-S3 and runs the entire length of the upper and lower leg Sciatica is a term that is often over used in sports medicine and is often a catch all term for any pain which radiates down from the gluteal region to the lower leg.  With radicular symptoms, it is important to determine if this is coming from the lumbar spine, nerve root irritation or entrapment or compression of the sciatic nerve at the bifurcation of the piriformis.  For our purposes, we will use the term sciatica to describe conditions just related to the sciatic nerve.  With pathokinematics, the nerve is put under a tremendous amount of tensile load with excessive hip adduction, especially when combined with a trendelenburg.  If this occurs with high loading activities or occurs repetitively, then there is an increased potential for the nerve to become inflamed or compressed by the piriformis.  Since nerves are vascular tissues, this tensile load and/or compression will result in an inflammatory response by the nerve.  This will result in radiating pain.  When this is the result of entrapment or compression of the nerve from the piriformis, it typically starts as deep posterior gluteal pain (piriformis syndrome), then progresses to radiating pain that can radiate down to the lateral calf. Whether it starts as radiating pain or deep gluteal pain that radiates down the leg, identification and early intervention is critical to a quick recovery.


iii.     Deep posterior gluteal pain with sciatica – worst case scenario is the combination of both of the above conditions.  You will typically see this in the athlete who has been attempting to work through piriformis syndrome allowing it to progress to sciatica.  In extreme cases, this can involve lengthy rehabilitation which is easily exacerbated with some of the typical interventions we use.  Therefore, early identification and intervention is key to a quick and speedy recovery and return to sport in this case.


2.     Anterior hip issues – in discussion of the anterior hip, in particular the hip flexor, we will also briefly discuss deeper internal structures of the hip that are impacted with pathokinematics.


i.     Labral Tears – the acetabular labrum is a thick cartilage that runs the circumference of the acetabulum.  This structure increases the contact area and deepens the acetabulum which provides some increased stability to the joint.  The labrum of the hip, much like the labrum in the shoulder, is designed to mitigate compressive forces and will wear more quickly when combined with shear stresses.  The acetabular labrum is put under increased compression and shearing stress when there is the combination of hip adduction and internal rotation or trendelenburg.  In closed kinetic chain situations and with repetitively high loads, the labrum can tear.  This most commonly occurs on the anterior superior aspect of the labrum and will usually result in anterior groin pain.  Labral tears are often hard to diagnose and usually have to be done via magnetic resonance imaging.


b.     Hip flexor tendonitis – with the stresses that are associated with pathokinematics as well as some commonly seen tightness (lack of hip extension) and weaknesses (decreased hip extension strength), there is an increased amount of stress that is imparted to the hip flexors.  With pathokinematic movement patterns in particular, we also tend to see significant tightness of the anterior hip (specifically the rectus femoris and iliopsoas).  Increased tightness and associated decrease in hip extension, during sport related activities can increase the potential for a rapid over stretch of these muscles resulting in an inflammatory response. 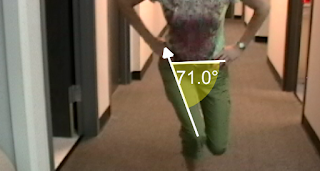 Let’s take a look at an example.  Here we are looking at a black belt in karate complaining of hip pain and decreased ability to kick with significant force with the right leg.  This has been going on for some time and she is experiencing more and more difficulty participating in her sport as time goes on.  When looking at this athlete’s mechanics, she demonstrates a significant amount of adduction at the hip with a single leg squat as well as during other functional movements.


Looking closely at the amount of adduction at the hip and the force vector represented in this picture, you can see that in this case, with single leg kicking activities, there would naturally be an increase in the amount of shear stress at the hip and particularly, increased tension to the structures of the lateral aspect of the hip.  This athlete is at risk for hip bursitis, hip arthritis, hip labral tears, groin strains and increased stress to the sacroiliac (SI) joint of the lower back.


In addition to risk of these types of injuries, this athlete’s kicking performance as measured by power output, force and torque, is compromised as she reports.  Pain and injury can be causative factors here, but also once again we see that the normal kinetic chain is interrupted and power is diverted away from the lower extremity (foot and ankle in this case) and instead is lost at the knee instead.  In this athlete’s sport, karate, it is critical to channel as much core strength through the entire chain and out at the point of contact with the opponent.

Dr. Nessler is a practicing physical therapist with over 17 years sports medicine clinical experience and a nationally recognized expert in the area of athletic movement assessment.  He is the developer of an athletic biomechanical analysis and author of a college textbook on this subject.  He serves as the National Director of Sports Medicine for Physiotherapy Associates, is a Safety Council Member for USA Cheer National Safety Council and associate editor of the International Journal of Athletic Therapy and Training.