As we saw in the previous blog last week, anything that alters the mechanics of the foot or the movements that occur at the foot can result in abnormal force attenuation and in a closed kinetic chain, where the feet are in contact with the ground we can see breakdown in any of the tissues and structures above the foot and ankle as well, including those in the lower leg.  We also discussed that many of the pathokinematics that we typically see at the foot and ankle are related to pronation, which we noted can result in abnormal force attenuation on not only the tissues of the foot and ankle, but also on those of the lower leg.  These effects, just as the effects on the foot and ankle, are also significantly increased during high impact sports due to the increased force required to participate in these types of activities.  Potential problems include, but are not limited to:

1.     Shin splints/stress fractures – shin splints or medial tibial stress syndrome refers to pain along or just behind the tibia.  This is a very common injury in runners and female athletes and occurs when there are repetitive high load activities that outpace the body’s ability to repair the tissues or the loads are simply too high for the body to resist.  Abnormalities in lower extremity biomechanics have been associated with increased incidence of shin splints.  If shin splints persist and the underlying mechanics are not addressed, this can lead to:


a.     Tibial stress fractures – If the inflammation/pain is not resolved, the underlying mechanics or causative factors are not addressed and the activity continues, it can result in micro fractures of the tibia.  This can require prolonged care, casting and in extreme cases surgery.


b.     Anterior compartment syndrome -   in cases of shin splints and tibial stress fractures, it is important to monitor the athlete/patient for anterior compartment syndrome.  The anterior lateral portion of the lower leg is enclosed in a thick fibrous tissue called fascia.  This fascia encloses the anterior tibialis, extensor hallicus longus, extensor digitorum longus and the peroneus tertius muscles.  Along with this musculature, it also includes the deep peroneal nerve and the deep tibial artery.  Since the anterior compartment is an enclosed system, swelling in this area is of major concern due to the fact that it can compress the nerve and arterial flow to the lower leg and foot.  If sufficient enough and of long enough duration, it can cause permanent paralysis. 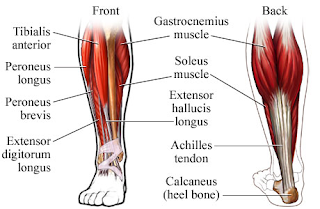 2.     Pulled calf muscle— the calf is composed of the gastrocnemius and the soleus muscles.  A   With pathokinematics this is a common injury that can occur in runners and jumpers due to excessive foot pronation or limited flexibility of the calves.  Excessive pronation or decrease in dorsiflexion with running (from tight calves), can result in abnormal force attenuation at the calf or overwork.  Over time, this can lead to a tear or pull in the calf.
pulled calf muscle can occur in either the gastronemius (more superficial) or in the soleus (more deep).


Pathokinematics Impact on the Knee: 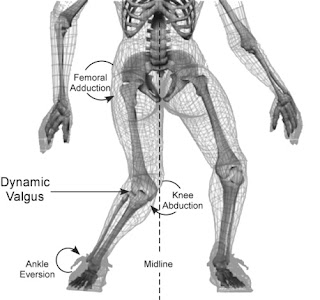 As we move up the kinetic chain, we see that the pathokinematics can also have as dramatic an impact on the knee as they do the foot and ankle.  As described previously, we typically see pathokinematics in one or a combination of the following movements at the knee:


2.     Internal rotation of the femur on the tibia


3.     Genu recurvatum (hyperextension of the knee)


Occurrence of these in high loading situations or with high impact sports, can alter the articulations that occur between the bones or result in abnormal force attenuation on the tissues of the knee.  This can lead to several problems such as:


1.     Patellofemoral issues – the articulation between the patella and femur is the patellofemoral joint.  The patella rides in a groove in the femur from flexion to extension in a very predictable manner.  For this to occur in this predictable manner, the femur must remain in relatively “normal” alignment during closed kinetic chain activities.  When the femur falls into valgus, internally rotated or a hyperextended position, this changes the articulation between the two joints, potentially resulting in: 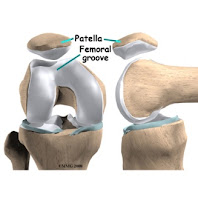 b.     Patellofemoral syndrome/Chondromalacia – the patella rides in the femoral groove between the medial femoral condyle (MFC) and the lateral femoral condyle (LFC) as the knee moves from flexed   This groove is higher on the medial aspect (inside) than the lateral aspect (outside).  In order to maintain alignment of the patella in this groove with movement and to prevent abnormal wear between the groove and the underside of the patella, the knee must move in a somewhat predictable pattern.  Any variation in alignment of the femur on the tibia or change in the movement pattern in closed kinetic chain activities (valgus, internal rotation, hyperextension), can dramatically alter or change the contact area between the underside of the patella and the femoral groove.  If this occurs over time, this can result in wearing away of the articular cartilage between the two surfaces (chondromalacia) and ultimately result in pain (patellofemoral syndrome).
position to an extended position. 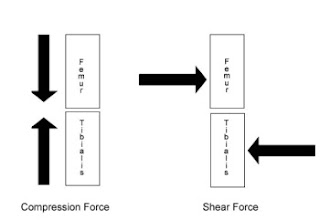 2.     Meniscal issues – the knee has two menisci (medial meniscus and lateral meniscus) that serve as   These menisci are designed to absorb compressive forces between the femur and the tibia and aid in preserving the articular cartilage of the femur and tibia.  The meniscuses, on the other hand, are weak when they are subjected to shearing forces and under these conditions they are more likely to tear.  Shearing force between the femur and the meniscus occurs when there is a valgus stress or rotational (internal rotation) stress imparted to the knee.   It is shearing forces that result in medial or lateral meniscal tears.  Over time and with increased severity of the tears, this can cause degenerative changes of the articular surfaces between the femur and the tibia (often referred to as degenerative joint disease).
cushions or shock absorbers of the knee. 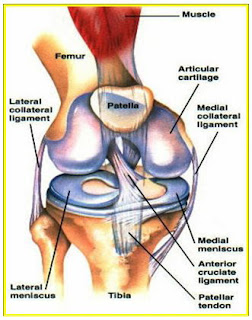 posterior cruciate ligament, and the medial and lateral collateral ligaments.


a.     Anterior cruciate ligament (ACL) – the ACL originates at the medial border of the lateral femoral condyle and inserts on the tibia at the intercondylar area.  The ACL functions as a secondary static restraint to anterior translation of the tibia on the femur and hence aids in not only stabilizing the joint but also in protecting the meniscus from shearing forces caused by this kind of movement.  An ACL injury is a common injury in sports and in most cases will require surgical repair in order to facilitate full return to sport.  By design, the ACL is a good restraint to anterior translation however it is severely compromised when rotational (internal rotation) stresses are imparted to the knee.  Rotational stress creates a shearing force on the ACL.  In cases where there is a combination of internal rotation and valgus stress to the knee, creating both shearing force and tensile load, the ACL is compromised to an even greater degree.  This can result in either an avulsion of the ACL where part of the bone is torn away, (seen typically only in younger athletes), an ACL tear or an ACL rupture.

b.     Medial collateral ligament (MCL) – the MCL originates at the medial border of the medial femoral condyle and inserts at the periorsteum of proximal tibia, deep to the pes anserinus.  The MCL functions as a secondary static restraint to valgus stresses imparted to the knee.  By design, this ligament is stronger in tensile load situations but weak when subjected to shear loads.  With pathokinematics, this ligament is compromised in two ways.  When subjected to repetitive valgus stresses under high loading conditions, like those associated with sport, increased laxity in the ligament can occur over time.  This compromises its ability to resist subsequent high loads while simultaneously allowing increased gapping of the joint which increases the magnitude of the load imparted to the ligament.  When there is a combination of shearing stress (internal rotation) combined with tensile load, there is an increase in the potential for injury to this ligament.  This can lead to MCL pain, tears or ruptures.


4.     Unhappy Triad – the “unhappy triad” terminology is used commonly in the sports medicine literature and community in reference to a common injury involving the ACL, MCL and the medial meniscus.  This injury typically occurs in sports from either a contact injury (where the knee is struck) or non-contact injury (usually during a planting and twisting motion).  It results from a combination of valgus stress in combination with internal rotation (shearing stress).  The typical course of treatment, depending on the severity of the injury, is ACL reconstruction along with repair of the meniscus tear.


5.     Iliotibial Band (ITB) Friction Syndrome – the IT band is a very thick and fibrous tissue that originates at the tensor facia lata (TFL) at the hip and runs along the lateral border of the femur to insert at the lateral aspect of the fibular head.  As the ITB transverses along the lateral tibial plateau, there is bursal sac that lies between the tibial plateau and the ITB.  ITB Friction Syndrome has often been correlated to tightness along the facial band and the TFL and is often associated with lateral knee pain.  This syndrome is commonly seen in runners.

Next week we will look at the impact these movements have on the hip.  If you like what you read the biggest compliment you can give to us is to share the passion.  Follow us on Twitter @ACL_prevention or on Facebook at Athletic Therapy Services.  Remember #MoveRight, last longer and perform better!