Can You Reach Your Full Athletic Potential Without Core Training? - Part II

But how do we identify this in our athletes?  If you do not have access to a comprehensive movement assessment or biomechanical analysis (like the 3D-DMA™) then there are some simple things you can look for in your athletes.  In our recent blog series on gluteus medius weakness, we talked about various positions of the pelvis during movement that can indicate weakness.  You can also see these same movements during athletic participation. 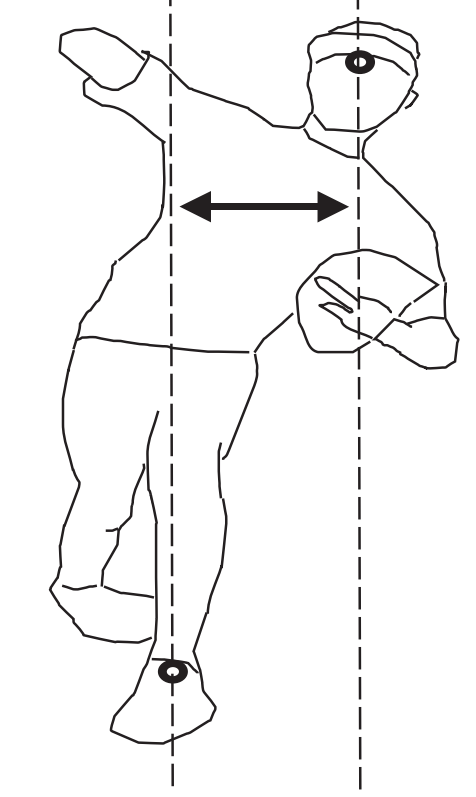 One study published in October 2013 by Oyama et al showed the effect of excessive contralateral trunk lean on pitching biomechanics and performance in baseball pitchers.  Before we get into the specifics of the paper, we should first define contralateral trunk lean.  Some authors will define it as contralateral trunk lean and some as retro-trendelenburg.  For the purposes of this paper, those two terms are synonymous with one another.  Diagram A demonstrates how the authors define it in this study as it appears during the throwing cycle.  The ideal position is to “keep the head balanced over the stride foot” at maximal shoulder external rotation.  When the head is not balanced over the stride foot (as in this picture here), valgus stress at the elbow is increased.  This lateral trunk lean “not keeping head balanced over stride foot” was shown by Fleisig et al in 2006 to increase valgus load to the medial elbow.  It is this increase in valgus stress that leads to medial elbow pain and puts the athlete at risk for ulnar collateral ligament (UCL) injury.  The purpose of the Oyama study was to see if this could be observed on 2D video and  whether or not this movement resulted in greater loading to the joint and slower ball speed.

Methods:  In this study, 72 high school baseball pitchers 3-dimensional pitching biomechanics, ball speed and frontal view pitching technique was captured with both 2D cameras as well as a 3D vicon system.  Each pitcher was fitted with reflective markers and performed 5 to 10 submaximal pitches.  After warm up, each was asked to pitch as fast and as accurate as possible at an X in the strike zone. It was considered a strike if they hit the strike zone.  Each pitcher pitched until 5 qualifying pitches and minimum of 3 strike pitches were captured.  For each pitch, kinematic and kinetic data, videos and ball speed were all captured.  The point of maximal shoulder external rotation was identified and at that point, the amount of contralateral trunk lean was also identified.

Discussion:
Although this excessive lateral trunk lean was associated with increases in velocity, there was also an increase in loading at the shoulder and elbow.  Although, upon initial review, these load variances might not seem that significant, a 2-4 lb load increase to the shoulder and elbow joint, when done repetitively over time can lead to shoulder injuries (labral tears, rotator cuff tears, etc.) or elbow injuries (UCL tears, elbow pain, etc.).

Although this study showed some positive performance gains (3 mph) with this altered position, there could be other factors fitting into that.  Some factors to consider are the average time of play for those who had increased speed, height and age of the players.  When looking at these factors, there is not much variance between those with trunk lean and those without.  Two other factors not mentioned in this study was if there was a previous report of injury or pain in those with trunk lean and those without and training (specifically coaching on pitching technique) amongst the two groups.
The other question that arises is if core/hip strength were improved, would this trunk lean improve and would performance also improve?  Although we don’t have a particular study telling us this, we do know from basic biomechanics that improvements in hip/core strength results in improved kinetic energy transfer from the lower kinetic chain to the hips to the core/shoulder/elbow and eventually ball.  Increases in kinetic energy transfer equates to increased throwing velocity.

So the question becomes, do you correct the technique at the expense of velocity?  Or could targeted strengthening to the area result in self-correction and performance enhancement?  This could and would be a hotly contested debate between clinical call (yes to decrease risk of injury) and coaching call (no as performance might suffer).  Whether right or wrong, when making that decision one must consider:

Considering the above, if addressed both from a coaching perspective (improving the throwing biomechanics) and addressing the strength/proprioceptive deficits of the core, then one should see improvements in both performance as well as decreased loading to the shoulder and elbow (hence reduce risk for injury).  That considered, then core and hip strengthening could be and should be a critical component of pre-season and in season training for pitchers.

We hope that you found this blog insightful and useful.  Stay tuned next week as we continue to provide insightful literature reviews with practical applications.  As we stated previously, stay tuned and if you like what you see, SHARE THE PASSION!  It is the biggest compliment you can give.  Follow us on Twitter @ACL_prevention and tweet about it.  #DMAOnTheMove and help us spread the passion and #movementonmovement.