Move To Improve: Why There is a Movement Afoot to Analyze Movement in Sports

Over the last 15 years, there has been a plethora of research that has been published looking at causative factors for Anterior Cruciate Ligament injuries in athletics.  Part of the reason for all the research is due to the pure volume of injuries, the impact they have on performance (current and future), the overall cost of these injuries and the impact on future injuries & health care costs.  Annually, there are over 250,000 ACL injuries in the US.  At an annual cost of >$5B, the financial impact to the athlete, organization, carrier and health care system are astronomical.  According to recent studies published in the American Journal of Sports Medicine, 20% of those who have an ACL reconstruction (ACLR) will have a 2nd in 2 years.  40% of those will have more structures involved (meniscus, MCL, etc) which will prolong rehabilitation and increase cost.  79% of those who have an ACLR will have OA in 12 years.  This means increased risk for total joint procedures and/or surgery later in life.
We are also finding the impact to athletic performance, current and future, is much greater than we originally thought.  Recent published data for return to sport is also much lower than previously thought.  In a 2012 study (AJSM 2012), investigators found that only 63% of high school and 69% of college athletes return to sport following ACLR.  Of those that do return, only 43% return at the same level.  This puts not only future athletic careers at risk but also jeopardizes potential scholarships for athletes that may not have other means for a higher education.  So, not only are the initial cost astronomical but the downstream health complications are high and the athlete’s ability to return to the same level of play is greatly reduced.  Hence, why there is such a large amount of research being performed to reduce ACL injuries.
Although we think we know a lot of the answers, the proof is in the results.  Although we know that interventions can result in as high as 88% reduction in injury rates, the global changes we are having are minimal.  To date, ACL injury rates have only seen a 1.5% reduction in the last 5 years.  Despite all we know, we still have not had as much of an impact as we hope or need to have.  Why is that?  We can speculate about all the factors but it is reasonable to assume that a broad based approach will be only as partially successful as an individualized approach.  But on a large scale, how do you individualize the approach?  This is one reason why there is a major focus to find out as much as we can so that we can use that information to drive interventions.
Reviewing some of the recent literature (AJSM March/April 13’) we see an attempt to get to some common themes or deficits we see in those who have ACL injuries.  One common theme that is identified is asymmetrical strength pre and post ACL injury.  Although investigators are looking into, the real question becomes why?  If present pre and post, why is it there?  If someone is weight bearing symmetrically and in absence of neurological deficit, there should be no asymmetry in strength.  Another common theme is abnormal frontal plane motion pre and post ACL injury on the injured extremity and whether or not this is adding to the increased risk for a 2nd ACL injury.   Again the question becomes why?  If weight bearing and strength is symmetrical, then frontal plane motion should be as well.  Finally is the JSW (joint space width – space between the femur and tibia) is less in those who have had an ACL injury and if this is reason for increase in osteoarthritis (OA).  Again, the question becomes why?  If weight bearing and strength are symmetrical and there is an absence of bony pathology, then JSW should be symmetrical as well. 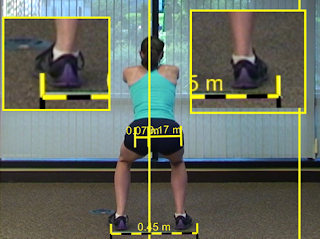 Hence the reason for the movement that is afoot to look at movement.  How an athlete moves gives a clear indication to what are some of the contributing factors to the above.  If someone has a lateral shift (shifting weight to one side as demonstrated in figure 1) during squatting motion and this is carried over to every time they squat during functional activities and sports, then this could account for asymmetrical strength.  The pictured example is an elite athlete with a >2 1/2 inch lateral shift.  f someone has weak gluteus medius (as in figure 2) which results in hip adduction and internal rotation with every step they take, then abnormal frontal plane motion will occur.  The pictured example is severe g.med weakness adding to severe abnormal frontal plane motion.  If both of the above exist, which in many cases they do, then JSW will be dramatically decreased which could result in OA down the line.  All of this is identifiable with a movement assessment. 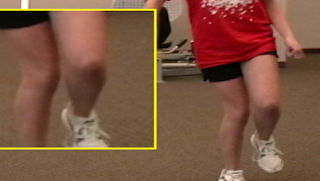