What is a Lateral Shift & Why Does It Matter?

When evaluating human movement on a regular basis, you start to identify certain trends for normal movement and abnormal movement.  It is these deviations from “ideal movement” that have been researched for the last decade and which have been correlated to injury risk.  Reiman et al as well as others have linked proximal hip weakness and the adduction that occurs as a result to risk for knee and ACL injuries.  When viewing this example of an Olympic athlete, it is easy to see how she may be at risk for injury.  However, it has not been well accepted the impact that this also has on performance.  This despite the fact that Meyer et al as well as others have also shown that improvement in these abnormal movements also result in performance improvement, increased power output and strength gains.  If we think about the previously mentioned athlete and imagine that she is a sprinter, we can imagine the impact these movements would have on kinetic energy transfer, efficiency of movement and power generation.  Although this concept is easy to see conceptually, it has not been fully vetted in the research.

However, one abnormal movement trend we have not heard a lot about is lateral displacement of the pelvis that occurs with squatting motion.  For the last 7-8 years, with the Dynamic Movement Assessment™, we have been capturing what we termed lateral shift of the pelvis that can occur with a squatting motion.  Capturing of this movement was vital as it was felt that the impact on force generation with this movement and the asymmetrical strength that would develop was critical to performance and to injury prevention.  In this Olympic level athlete, you can clearly see the deviation to the right throughout the squatting motion.  This would be termed a right lateral shift and something that would be imperative to start correcting.  There are many potential causes for this lateral shift which is beyond the scope of this paper.  However, intuitively, it makes sense that a lateral shift, like this, which is present throughout all daily activity and carried over into training would result in: 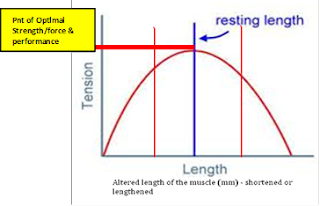 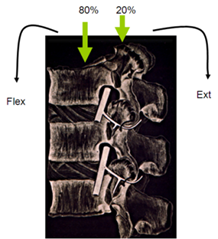 2.      Decreased endurance – with a lateral shift of this magnitude, there is a decreased efficiency of movement with one side working more than the other.  This creates imbalances in not only strength but endurance as well.
3.      Increased loading of tissues – tissues are biomechanically designed to function and be loaded in a specific way.  With a lateral shift, the tissues are loaded in a position that is puts them at a biomechanical disadvantage, loading them in a way they are not designed to be loaded.  Loading outside of those “optimal loading conditions” can lead to tissues breaking down and potentially lead to injury.  In this case, just looking at the lumbar spine, we see that the loading is outside the optimal 80/20 relationship with an increase in stress being imparted to the left facet joints of the lumbar spine.  Aside from the lumbar spine, these loads are also altered at the hip, knee and foot/ankle.
So, intuitively and conceptually, it makes sense that a lateral shift has an impact on both injury potential and performance.  However, that has not been well vetted in the research until recently.  In 2013, we have started to see some authors describe a lateral displacement of the pelvis seen with a squatting motion and acknowledging the need to further research.  Then in May 2013, Atkins et al published a paper in the Journal of Strength and Conditioning Research related to bilateral imbalance of the lower limbs in elite youth soccer players.
Methods:  In this study, the authors assessed a total of 74 elite soccer players from 12 years of age to 18 years of age.  All subjects were members of the soccer academies aligned to professional English clubs.  Each subject was asked to perform three trials of a deep squat on force plates.  Bilateral peak vertical ground reaction forces were assessed for each athlete during the three trials.
Results:  Although the authors observed asymmetrical weight bearing (lateral shift) during the course of the movement, they were not able to quantify the magnitude of the lateral shift.  The most significant lateral displacement occurred between the ages of 14 to 16 years of age.  This also equated to significant bilateral imbalances in peak ground reaction forces. 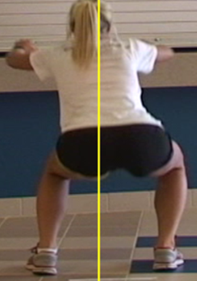 Discussion:  This study clearly shows that a lateral shift of the pelvis during the squatting motion does in fact result in altered ground reaction forces (GRF).  Looking at prior studies evaluating GRFs and the impact on injury rates, we know that imbalances of this nature do increase risk of injury.   But how does this asymmetry impact strength and performance?  Knowing the asymmetry in GRFs exists, we from prior studies and the field of biomechanics that that this leads to asymmetrical force production.
That aside, we also know that improvement in the efficiency of the squat leads to increased strength which results in improved athletic performance.  Interestingly enough, this is a concept that has eluded the debate but should be the main driver of the debate.  Since most coaches and players want to know the impact on performance, then we should be highlighting that fact.  In 2004, Wisloff et al showed that improvement in squat strength had a direct impact on sprint speed and vertical jump performance.  Looking at the athlete here, any of us would agree that correcting this lateral shift would have a dramatic impact on her ability to squat more efficiently and increase her strength with.  Doing so will not only reduce her potential for injury but improve performance.
Posted by Dr. Trent Nessler at 4:00 AM