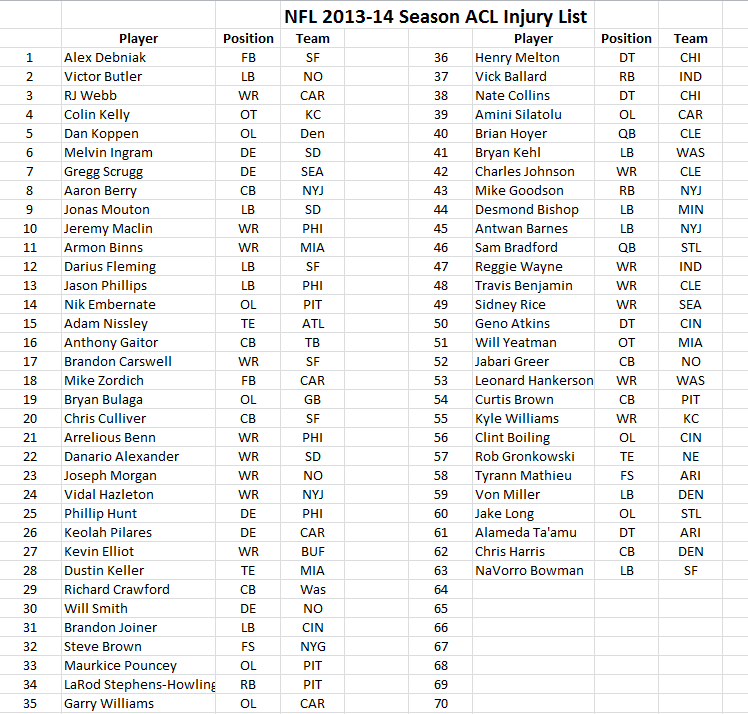 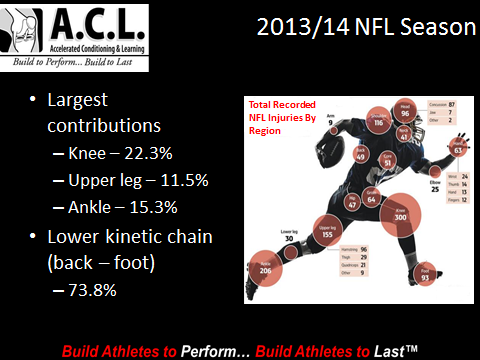 From the time players reported to NFL camp to the end of the Superbowl, there were a total of 63 ACL injuries.  Why do players have so much concern?  Looking at the number of reported injuries this season, knee injuries account for a total of 22.3% of all injuries sustained.  Concussions, on the other hand, accounted for less than 6% of injuries sustained.   Sustaining an ACL injury means a 20% chance of re-injury in 2 years, 33% chance of returning to sport in the first year, 40% chance of not returning to the same level of performance as pre-injury and a 79% chance of having osteoarthritis in 12 years. The numbers are stacked against them for sure.  With knee injuries accounting for 22.3% of all injuries along with the fact that there is a high probability for re-injury and reduced performance, it is no wonder these are at the top of NFL players concerns.
With the high visibility of these injuries this season, it has many in the NFL wondering what to do about it.  But, what if there was a way to assess for risk for these injuries?  Over the course of the last 10 years, there has been a plethora of research that has been performed in this area.  We know what the mechanics are that lead to these injuries.  Patterno et al showed in 2013 that those who demonstrated a 2D valgus in single leg activities were at higher risk for ACL injuries than those who did not demonstrate.  Yet, whether that 2D valgus is the result of foot pronation, lack of hip proprioception or deficits in hip strength or endurance cannot be determined by one isolated test.  We know how to identify them with isolated movements but yet there is no systematic way to determine root cause or in a way that can be administered in mass (with physicals).  Or is there?  Studies show that if you address these mechanics associated with ACL injuries and reduce this 2D valgus you can also reduce the risk for all other lower kinetic chain injuries (from the lumbar spine to the foot/ankle).  Considering lower kinetic chain injuries account for 73.8% of injuries sustained in the NFL, then addressing these should be top priority and should have multiple benefits.  Arnason et al showed in 2008 that programs that can successfully reduce injury rates also improve team’s seasonal performance by reducing days on the disabled list (DL - list NFL players are placed on once injured).  Studies also show the most significant number of days on the DL are accounted for by lower kinetic chain injuries and lower kinetic chain surgeries.  So, if you can reduce lower kinetic chain injuries as a whole, you can reduce days on the DL.  Why is this important?
Players that most often end up on the DL are typically your better players.  These are the players that are playing more and hence have more athletic exposures (exposure to potential injury) than next tier of players.  Arnason et al also showed that due to limited resources, once those higher caliber players are on the DL, that teams are unable to replace them with players of similar abilities.  This has a direct impact on the team’s individual game performance as well as seasonal performance.  So, if you can reduce the number of days on the DL, your better players are in the game longer and able to contribute to the team’s overall success.  Some studies have shown programs that are lower kinetic chain injury focused can have as much as a 50-60% reduction in the days on the DL.  So, the impact to team performance is significant.  If you consider this along with the previous studies we have reviewed on the impact to individual performance (vertical jump and sprint speed), then it appears an appropriate program would have a multi-faceted impact.
So, instead of manipulating the numbers, the NFL should embrace them.  Look at the opportunity to reduce injury rates and improve individual performance and team performance.  For more information on the DMA, you can view our online rebroadcast of presentation performed at the Andrew’s Institutes Annual Injuries in Football Course.
Posted by Dr. Trent Nessler at 4:00 AM