The Dreaded ACL Injury - Is There A Solution - Part III

Last week, we started a deep dive into what are some of the positions that the knee gets into that causes the non-contact ACL (dynamic valgus) and how we can assess that.  However, non-contact ACL injuries are very complex and there are a lot of things feeding into this.  One that is often ignored is the contribution of the core.  First of all, when I talk about the core, what I am referring to is the section from the knees to the chest.  From an anatomical point of view, this includes the majority of the structures that impact the core.  Structures and tissues that attach to or directly influence loading to the core or kinetic energy transfer across the system.  Some would argue that anything from the foot to the head would impact core, which I agree, but from a training perspective, we are sticking with my definition.

Before we get into the core’s impact on ACL injuries, I wanted to give you some interesting facts on the core.  The core is a critical part of sports performance and yet it is so often ignored as a part of what we do with our training.  In baseball, studies have shown that if you increase core stability (which is a combination of strength and endurance) you can improve pitching performance in MLB pitchers (Chaudhari et al J Strength Con Re 2011).  It has also been shown that improving core stability in MLB pitchers results in a 3-fold decreased risk of shoulder and elbow injuries including UCL injuries (Tommy John) and labral injuries in the shoulder (Chaudhari et al Am J Sport Med 2014).  Core also plays a key role on overall athletic performance.  Improvements in core stability has been shown to increase vertical jump in basketball players (Hoshikawa et al J Strength Con Res 2013) and improve sprint speed in sprinters (Tong et al Phy Ther Sport 2014).  Improvements in dynamic postural stability (which comes from the core) have been shown in several studies to reduce the risk for concussion (Johnston et al Am J Sport Med 2019, Garner et al In J Kines Sport Science 2020).

As interesting as those facts are, the core also plays a key role in preventing of ACL injuries.  Studies as far back as 2013 (Frank et al Am J Sports med 2013) have shown a strong correlation to poor core stability and an increase in risk for ACL injuries.  Some recent studies have even indicated certain test positions we can use for the core which have a higher predictive value for determining ACL risk (DeBlaiser et al Am J Sport Med 2019).  So how do we test?

The two main test we use from DeBlaiser’s study are the plank and the side plank.  The key with the both of these tests or training is the proper position.  If you are going to train or test it, train or test it right!

Plank – feet should be all the way together (not depicted), knees straight, hips AND spine neutral, shoulders and elbows at 90 degrees and downward angulated gaze (depicted).

Test – hold for 1-minute period of time.  What you are looking for:

Biomechanically and physiologically, what happens during this test tells us a lot.  For our purposes here, we are going to stick with just recognizing these things and making sure when we train that we don’t let it occur. 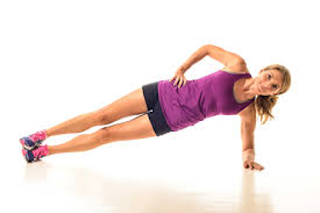 What you are looking for:

3.     Do their shoulders roll forward?  If they do, at what time point do they do that?

Again, this gives us a starting point of things to recognize and train.  Simply preventing these movements during both the plank test and side plank will dramatically improve core stabilization and mitigate the risk for injury in your athlete.  Aside from the prevention of injury, improved performance on these movements mean the athlete will be more equipped to transfer kinetic energy from the hips to the core to the shoulders.  What this means improved performance for the overhead athlete (baseball pitch velocity, volleyball serve speed and power).  Improved stability of the core also means that the quads, hams and hip musculature is now pulling on a stable base and therefore able to produce more force.  This means they are able to sprint faster and jump higher.  A win-win.

Next week, we will dig into how squatting impacts injury risk and performance.  More importantly, what should we be looking for and how do we address?  I hope you found this information useful and looking forward to sharing more with you.

Dr. Nessler is a practicing physical therapist with over 23 years sports medicine clinical experience.  He is a nationally recognized expert in the area of athletic movement assessment and injury prevention.  He is the founder | developer of the ViPerform AMI,  ViPerform AMI RTPlay, the ACL Play It Safe Program, Run Safe Program, author of a college textbook on this subject and published researcher.  Trent has performed >5000 athletic movement assessments in the US and abroad.  He is the President of Rebound Vitality providing injury prevention services for the tactical athlete and movement consultant for numerous colleges and professional teams.  Trent also a Brazilian Jiu Jitsu purple belt and complete BJJ/MMA junkie.