Last week we discussed the correlation of kinesiophobia (fear of movement) to shift of weight over to the non-involved limb.  Noehren et al Am J Sports Med 2018 highlighted this in a study that showed how athletes unload the involved limb during bilateral jumping tasks.  As stated in our previous blog, we discussed how we see a similar pattern (lateral shift) during a regular squatting motion.  This was followed by a focused discussion on how we can correct this lateral shift and in how doing this aids in reducing kinesiophobia.

Another common movement pattern we see in athletes with higher levels of kinesiophobia is a lack of stability in single limb performance.  Although we start to see this present itself in single leg squats, it becomes more pronounced as we increase the physical demands with the single limb testing (as depicted here).  How we test this is with the following sequence: 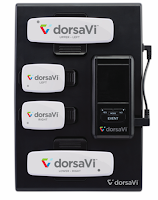 All of these tests are performed on the right leg first in succession then on the left leg.  Keeping in mind, this is only a portion of the test and doing in this fashion allows for a build up of fatigue in the limb.  At the same time, with multiple repetitions, the athlete stops thinking about controlling their knee motion and more about just being able to complete the task.  What we find is that this helps us get a truer picture of their natural motion versus what they think we want them to look like.

During each test, the data is captured via a 3D wearable sensor that uses an IMU (inertial measurement unit) with a gyrometer, magnitometer and accelrometer that captures this motion at greater then 200 frames per second (50 frames per second faster than the human eye).  This provides a very accurate objective measure of motion during increasingly difficult tasks.

Single limb stability is challenged in the single leg squat and the single leg hop.  However, with the hop plant, the athlete has to actively move through several planes of motion.  Doing this creates a significant challenge to whole kinetic chain stability (pelvis to the foot).  As the athlete jumps (for example medial), their center of mass is moving medially and the athlete must land on the limb and prevent the knee from moving in that same direction all while stabilizing their core and centering their center of mass.  Although this may appear excessive, this is nothing close to the demands required during athletic participation.  The video clip below shows the sequence of the single limb testing.

One trend that we tend to see with the single limb testing is that athletes who report higher levels of kinesiophobia on the TSK-11 (Tampa Scale for Kinesiophobia 11) have greater frontal plane motion during single limb testing, higher speeds of valgus during testing and less control of center of mass.  Knowing this, it would make sense that if we improved an athletes whole kinetic chain stability in single limb performance that this would impact their fear of movement and reduce scores on their TSK-11.  And that is exactly what we see.  So, how do we do that.

There are a lot of ways to help create single limb stability.  What we have found is there are several links in the chain that add to increased frontal plane motion and increased speed of motion.  These are the:
Doing single limb training that will include proprioception, strengthening and endurance is a given, however we have found doing a progression that goes from:
Let's give a couple of examples.  Keep in mind with ALL of these exercises, the athlete MUST not allow their knee to go into a dynamic valgus position and control .  If this is not controlled, you are simply training their poor movement patterns.

Single leg isometrics - this is a great starting point.  In this exercise the athlete places their leg against a stable surface (wall) and pushes into the wall.  This is typically done for 10-20 reps and done bilateral.  Although the force is generated in the leg pushing against the wall, the contralateral limb must also provide a lot of stability during the single leg stance.  It is important that the hips are pointing straight ahead.  If the athlete's hips roll out, this will significantly alter glut medius activation on the stance leg.  A progression for this exercise is having the athlete do this at multiple angles (moving leg up and down the wall). 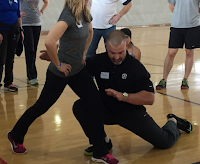 In addition to these exercises, another technique that is extremely beneficial is doing perturbations during single limb exercises.  Perturbation is defined as the action of perturbing the state of being.  In our case, we would provide a slight force that would cause the athlete to increase muscle recruitment enough to resist the motion we are applying.  For this scenario, we would provide this perturbation at the knee and our force would be a adduction and internal rotation directed force.  The motion would NOT be hard enough to overcome the athlete's ability to sustain the desire stable position.  Rather, our technique would be lower load and rapid in application.  Doing so trains the athletes ability to rapidly respond without breaking.

In addition to the exercises above, you can do the ACL Play It Safe program.  This program is offered free on IOS and Android.  Our studies show not only significant improvements in frontal plane motion with this program but also drastic reductions in speed of valgus.

Next week, we will close out this discussion when we cover the work of Webster et al and use of the ACL-RSI.  We hope you have enjoyed this discussion and stay tuned as we continue the discussion.   #ViPerformAMI #ACLPlayItSafe