RTPlay Following ACLR - How Do We Know When Is The Right Time? - Part IX

Throughout this entire series, we have talked about how do we know if an athlete is ready for return to play?  Last week, we looked at some specific testing that we can use that will give us some very objective data on the athlete's status and whether or not they are ready to return to play.  But as we found out from King et al Am J Sport Med 2019, as much as we would like to think we are changing movement with our protocols, the reality is, we are not as good as we think we are.  Considering this, it is not only important to "measure movement" but also to know how to positively impact the movements we measure.

So, we know what the movements are but how do we change them?  That is the intention of our discussion today.  To determine what the movements are telling us and how we can use this information to create exercise program which address.  Before we do that, we must first talk about 7 key concepts that we feel must be considered when creating programs designed to improve movement. 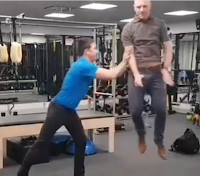 Being mindful of these 7 key concepts will go a long way in creating permanent changes in the motor plans that athletes revert to in athletic play and which will reduce injury risk and improve athletic performance.  Next week, we will discuss how each individual movement can drive what we do clinically.  It is where the rubber meets the road.   If you enjoy this blog, please share with your colleague and follow us on instagrm @ bjjpt_acl_guy and twitter @acl_prevention.  #ViPerformAMI #ACLPlayItSafe