Last week in our discussion we looked at the study by Rohman et al Am J Sports Med 2015 where the authors discussed the topic of absolute LSI or Limb Symmetry Index.  The authors introduced the concept of absolute LSI which is a comparison of the pre-operative non-involved limb to the post operative involved limb.  This is a better measure due to the disuse atrophy and weakness that will occur in the non-involved limb during the surgical and rehabilitation process.  Absolute LSI accounts for this variance.  Whether using absolute LSI or not, measurement of limb symmetry is important. 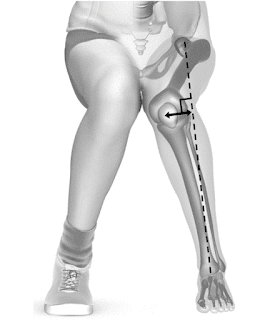 Since sports are primarily single limb in nature, it makes sense that the majority of the measures we do to determine if someone is ready to return to play should be single limb in nature as well.  Although, one of the gold standards in testing is the bilateral vertical drop jump (VDJ) test.  In this test, the subject stands on a 31 cm step, steps off thus dropping to the floor.  Upon contact with the floor, they immediately jump in the air.  The VDJ test is intended to give some indication of the athlete's biomechanics during explosive movements.  Traditionally, this has been used as a screening tool for injury.  However, Krosshaug et al Am J Sport Med 2016 did a study looking at the use of the VDJ test for predicting injury risk in 782 elite soccer and handball players.  In this study, the authors were looking for valgus at landing, peak knee abduction moment, peak knee medial displacement and peak ground reaction force.  Although peak knee medial displacement was the #1 risk factor identified, none of the VDJ test variables were associated with risk in these athletes. 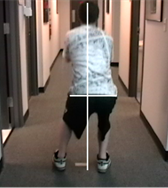 If you think about it, that does not seem logical.  Seems like we should be able to look at this movement and identify those that are at risk.  Would make sense that those at risk would have frontal plane motion of the knee during the explosive phase of this test.  Why are we not able see that or use this test to asses that?  We don't necessarily know the answer to that question but we do know that athletes are good at compensating.  The better the athlete is, the better they are at compensating.  If you look at the study by Noehren et al Orthoo J Sport Med 17, the authors of this study looked at VDJ test in collegiate athletes who had been cleared to start sport specific training following ACLR.  The authors were using this test to identify those athletes at risk for injury.  What the authors of this study found was that athletes who had high levels of kinesiophobia (fear of movement as identified via TSK-11) had significantly less loading of the involved leg during the drop than did non-injured athletes.   In other words, these athletes were not demonstrating any of the risk factors commonly assessed on this test but at the same time were significantly off loading the involved side to compensate for the weakness.

This is similar to what we see with the squatting motion.  Athletes who lack confidence or ROM or strength or a multitude of other reasons will end up shifting their weight over to the non-involved leg.  Unlike the athlete pictured above, most of the time this is not as obvious and as easy to see with the naked eye.  During high explosive activities, this is even harder to see.  So, how do we test in a way that we are addressing the movement patterns that we know put athletes at risk and at the same time mitigates the athletes ability to compensate. 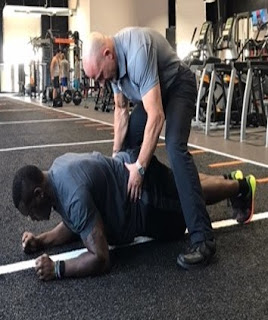 Knowing that sports are primarily single limb in nature, the results of these studies further indicate the importance of doing single limb testing.  So then the question becomes which tests should we do?  If we look at the Rohman et al Am J Sport Med 15 study, the authors concluded the best measures of single limb performance were the single leg squat, single leg hop, cross over hop and timed hop.  The authors further suggest that core testing should also be a component that should be considered in assessing an athlete's ability to return to play.

If we do single limb testing and we compare the involved leg to the non-involved leg (pre-operatively or post-operatively), does this mean that the athlete is safe for return to play.  Knowing that the majority of these tests are measured by the ability to perform, the ability to do in the same amount of time or with the same distance, does symmetry on the test alone determine whether someone is at risk or not.  Can an athlete have 100% symmetry and still be at risk?

This is the question we will dive into next week as we look at the study by Toole et al 2017 and Wren et al 2018.   If you enjoy this blog, please share with your colleagues and follow us on instagram @ bjjpt_acl_guy and twitter at @acl_prevention.  #ViPerformAMI #ACLPlayItSafe