Last week, we looked at some of the current research evaluating the impact that concussion has on lower kinetic chain injuries in athletes.  We also highlighted some of the trends we are seeing with our athletes and movement post concussion.  At the conclusion of last week's discussion, we mentioned some of the impact we see on center of mass displacement.

One thing that we have discussed in previous blogs is the fact that athletes who have had a previous concussion have a larger displacement of their center of mass (COM) during single limb testing.  During the single leg squat, for example, we see them subconsciously move their COM more lateral in order to create more stability and/or their COM moves more medial and laterally during the testing.

With an increase in COM displacement, you will often see athletes lose most of that control at the pelvis.  This will result in three typical patterns. 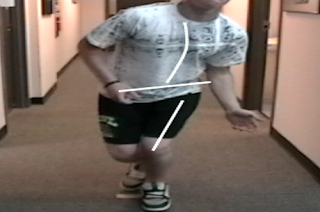 Retrotrendelenburg: In this scenario, the athlete will subconsciously shift their COM so the weight line is lateral to the knee and foot.  This creates stability in a couple of ways.  One is there is more stability over the stance limb created by increasing bony stability.  What is meant here is this position creates more acecetabular coverage on the femoral head (bones of the hip).  As a result of this increase in stability there is less muscular activity needed in the gluteus medius (which usually provides this stability.   This also creates more stability due to the weight line being line is lateral to the foot and knee.  Biomechanically, this is a more stable position due to where the weight line falls. 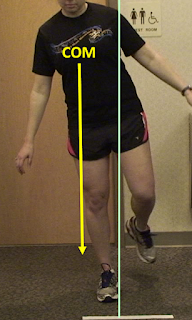 Cork Screw: In this scenario, the athlete experiences a combination of a trendelenburg (contralateral hip falls) and rotation at the same time.  As pictured, the result of this is a rotational stress that is placed on the stance limb's hip complex.  We often see this position associated with an increase in labral tears in the hip. 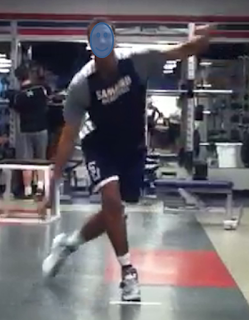 Although these positions above describe mostly hip positions, we often see this COM displacement correlated to loss of pelvic control.  In addition, with this COM displacement/loss of pelvic control, we see this results in athletes loosing their balance more during single limb testing.  We have seen this trend a lot and even more pronounced in our athletes with a history of concussion.

This was also noted in some recently published research.  Johnson et al Am J Sports Med 2018 looked at dynamic balance following a sports related concussion to assess the movement of the COM during dynamic testing in those who have been previously concussed and those who have not.

Methods:
109 elite male rugby players were baseline tested in dynamic balance performance while wearing an inertial measurement unit (IMU).  Each athlete was fitted with an inertial sensor with a gyroscope that was affixed to the 4th lumbar vertebra.  Each athlete then performed the Y-Balance Test (YBT) in 3 directions (anterior, posteromedial and posterolateral as a part of their preseason physicals.  The mean of the 3 trials (reach distances and inertial sensor variables) was obtained. 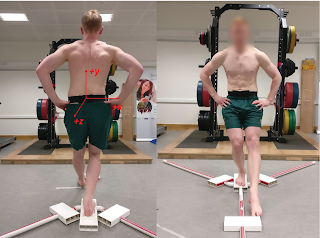 So this leads to some interesting questions.  Next week, we will look at some interesting findings we are seeing and how this might guide us to some specific training protocols.  If you enjoy this blog, please share with your colleagues and follow us on instagram @ bjjpt_acl_guy and twitter at @acl_prevention.  #ViPerformAMI #ACLPlayItSafe