Posture is an intentional or habitual assumed position.  The definition includes physical carriage, or the way one holds his or her body and body position, which refers to the various position(s) the body can assume.  Another way to look at posture is to think of the “arrangement of body parts,” or in other words, the way that the components of the body are aligned in relation to each other. 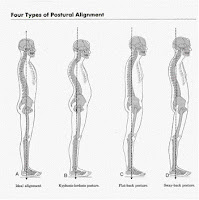 What does posture tell us that is important in our discussion of the kinetic chain and movement, specifically pathokinematic movement?  Posture can tell us a tremendous amount about symmetry, strength, tightness and the potential for injury in the body.  For our purposes here, we will define human posture, or the arrangement of the body and limbs, in terms of a static (fixed) position.  It is a motionless position or stance of natural comfort.  According to Kendall et al “in standard posture, the spine presents the normal curves and the bones of the lower extremities are in ideal alignment for weight bearing. The neutral position of the pelvis is conducive to good alignment of the abdomen and trunk, and that of the extremities below.  This aids in the optimal performance of the core as well as the lower extremities.”  Kendall et al, (1993) further state that “the chest and upper back are in a position that favors optimal function of the respiratory organs. The head is erect in a well balanced position that minimizes stress on the neck musculature.”[i]


In this “optimal position” the cartilage, joints, ligaments, muscles and tendons are loaded in the “optimal fashion” or placed in “correct” length tension relationships (the relationship between the length of the muscle and the force it can exert) and the overall efficiency of the system is maximized.  We will discuss this more in Chapter 5 when we look at pathokinematics and performance. 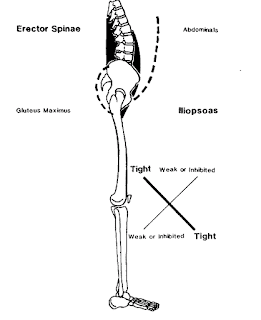 During work, school, exercise or training activities individuals can develop poor posture, meaning posture that is outside of this “optimal position.”  If poor posture is not corrected or addressed otherwise with training protocols, this can lead to what Janda, et al (1996) refer to as “Crossed Pelvic Syndrome.”  Janda describes this as occurring when there is:

§  Weakness or inhibition of the lower abdominals (or transverse abdominus)

This not only impacts the potential for low back pain but can also have a dramatic impact on force production, strength and endurance of the entire kinetic chain.  Visually, these postural anomalies can be observed both from anterior and lateral views, although they are easiest to see from the lateral view.  Some postural anomalies we can observe from the lateral aspect include but are not limited to:


·       Rounded shoulder – protraction of the scapula

Some postural abnormalities that we observe from the anterior or posterior aspect include but are not limited to:


·       Cervical sidebending – head is tilted to one side or the other


·       Shoulder depression – one shoulder appears lower than the other


·       Genu valgum - knees touch, but ankles do not (knock-knee); or varum - outward curvature of one or both legs at the knee (bowleg) 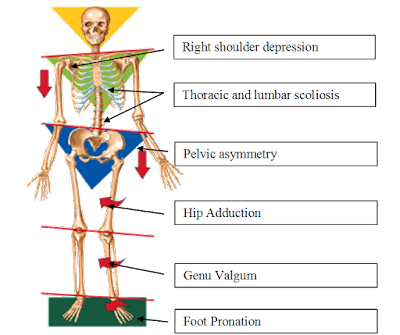 Certain postures, and particularly abnormalities in posture like those described above, can provide invaluable information about muscle tightness, muscle imbalances and potential injury and performance issues as noted earlier.  For example, if we are performing a visual examination of a college baseball pitcher, we may notice some deviations commonly seen in pitchers.  This would include but is not limited to:  scapular protraction and depression, scapular winging, thoracic and lumbar scoliosis, pelvic asymmetry, hip adduction, genu valgum and foot pronation.  For the college pitcher, this can be the result of years and years of participation in a sport that requires an asymmetrical or one-sided position.  If this asymmetry is not addressed with training both during the season and after, tightness and weakness can result that can lead to injury and decrease performance.  Let’s look at a few postural deviations more closely, reviewing the likely causes, potential injuries that can occur, and a few of the performance issues that can arise: 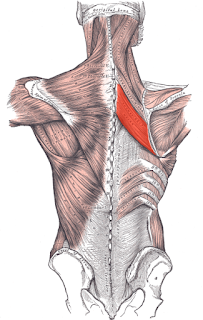 ·       Potential injuries – with the scapula sitting in a more depressed and protracted position, there are several tissues that are compromised.  In this posture, there is a significant reduction in the subacromial space (space between the head of the humerus and the acromion).  Since this is the space that the supraspinatus and portions of the infraspinatus tendons pass through to their attachment on the greater tuberosity, a reduction of this space increases the potential for irritation and tears of the tendons, especially during overhead activities like throwing.  This position also results in compression of the anterior structures of the shoulder, specifically the long head of the biceps and the anterior labrum.  Both the long head of the biceps and the labrum are further compromised by the cocking phase of throwing.


·       Performance issues – with the distorted position of the scapula on the thoracic cage, the length tension relationships of many of the muscles associated with stability of the scapula as well as the rotator cuff are significantly altered.  If the scapula stabilizers and the rotator cuff are weakened, then the transfer of kinetic energy across the system will not be as efficient and there will be decreased power output.  This can lead to (in this case) a decrease in pitching velocity or a decrease in the ability to sustain velocity from one inning to the next.


Next week we will continue with looking at the Thoracic spine.  As basic as it sounds, to truly change movement, we must change the way that we think.  And although it is not 100% data driven, it is 150% science driven.  Over the course of the next month, I will continue to provide blogs to help us all understand better the sciences behind movement and why we should do what we should do.  And that is, assess it better.  Move better, feel better, perform better and last longer.  That simple!
Next week, we will start to dissect this a little more.  If you are enjoying our blog, please share it and follow us on twitter @ACL_prevention and on Instagram at @Bjjpt_acl_guy