In our last blog, we highlighted a current research project with Division I volleyball players.  As a note, as with all our research projects we have two major goals in mind:


The majority of testing we have done in mass physicals up to this point was with smaller teams (Volleyball, Basketball, Soccer).  The number of athletes was much less and this allowed us to become much more proficient with our testing and not rushed.  It allowed us to work out the kinks in the process.  We knew, in order for us to expand this to football and to an entire athletic program, we had to have this process down like a well oiled machine.  We knew a Division I football team could have up to 110 players and a Division I athletic program may have 500+ athletes.  When we first started this, we could do a volleyball team or basketball team in about 4 hours.  Now, through this process, we can efficiently process 104 athletes per day. 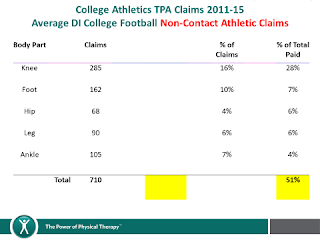 So, in this next project, we wanted to see if we would get similar results with Division I football players.  Why football?  According to industry data, Division I football teams spend a majority of their health care dollars on non-contact injuries to the lower kinetic chain.  Although the dollar amounts have been removed, this chart shows 28% of the dollars spent are for non-contact knee injuries and 51% of the dollars spent are injuries from the ankle to the hip.  When you include the lumbar spine in these numbers, you are looking at almost 70% of the health care spend. 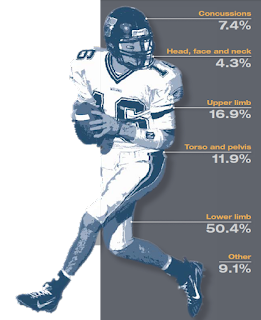 Sadly the results are not much better in professional football.  According to data provided by the NFL for the 2014/2015 football season, 50.4% of the injuries to football players were in the lower limb.  If you include the lumbar spine, hip and foot/ankle, this represents >70% of the injuries in NFL players.  In addition, of the 202 ACL injuries in the NFL since the 2013 season, over 73% of those are non-contact in orientation.  Aside from the cost, in a recent study by Mai et al - Am J Sport Med 2017, the authors showed NFL Players who have an ACL injury:


So, obviously identifying those at risk in football is critical.  So in this project, as a part of pre-season physicals we screened the football team.


Methods:
This study included 220 male football players ranging in age from 19 years old to 22 years old from 2015 to 2017.  All the athletes were scholarshiped athletes and were sophomores to seniors in their academic career.  Each athlete went through a baseline movement assessment (ViPerform AMI) as a part of their preseason physicals which consisting of 7 core movements.  Prior to performing this test, demographic information from each athlete was obtained.  This included name, age, weight, previous orthopedic history, previous ACL history and concussion history.  The ViPerform AMI movements consisted of: 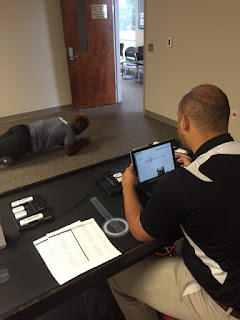 The ACL Play It Safe exercises consist of:


The exercises were performed under the direction of the team strength coach and done three times per week.  Each athlete performed these exercises throughout the season and compliance was tracked via the strength coaches attendance log.  Injury data was tracked through the team's athletic training EMR over the 2015/16 and 2016/17 football season. 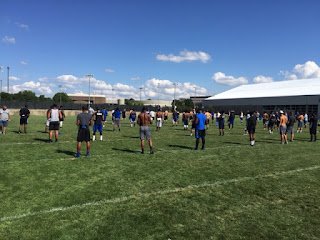 Hypothesis I - If a Division I football team performs ACL Play It Safe Program based on individual player VIPerform AMI results, there should reduction in days on the disabled list and recordable musculoskeletal injuries for the entire team.

For the purposes of this study and with a lack of a control group, the seasons with the intervention was compared with the previous 5 years of injury data collected for the football team.  When comparing days on the disabled list there was >60% reduction in total days on the disabled list and the 2 years with intervention had the lowest recordable injuries in 5 years.

By region,  injury rates decreased by:


In addition to the above results, there was also a 44% reduction in concussions during this time period.  We don't know what the correlation is but it is something we are tracking and seeing more and more.  There are a couple of theories with this.
We do not have the answer to this but we are tracking this trend and and seeing it repeated in several of our studies.  So although we don't understand the correlation, we should remain aware of the impact and use the information to our advantage. 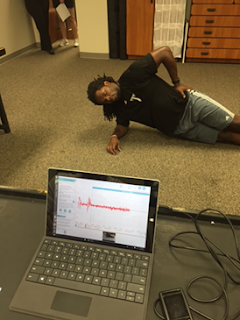 It should be acknowledged that we identify and recognize several flaws with this study.  One is uncontrolled variables.  As with the other study, without a "true" control group, all we could do is compare results to the previous 5 years of performance and injury data.  This introduces a lot of variables that are not controlled.  Why do we do this?  Frankly, we have no choice.  The schools we do our research with are schools that work with us because we provide a service.  It would be hard to ever tell a team that we are going to implement this program with half the team and not the other half.  If we were to do that, most schools would not allow us to do.  Therefore it is an all or none deal.

Considering this and the flaws, aside from this assessment and training, there were no other fundamental changes to the program.  The results are what the results are.  The athletes are happy, the coaches are happy and the school is happy.  At the end of the day, research flaws or not, that is what matters.  They see the results both injury wise, performance wise and cost wise.  There was significant reductions in injury rates, substantial health care cost savings and improvements in performance.  Whether there are controlled variables or not, the school and athletic department felt there was a significant return on investment.

Before we close this out, we must give a huge shout out to Lesley Parrish, DPT at Champion Sports Medicine at Troy University.  Without Lesley, neither one of these studies would have been possible.  She is the PI on both of these studies has been leading the way in injury prevention in college athletics.  Thank you Lesley.  Stay tuned next week as we start to discuss the impact of this type of program implementation with Division II soccer.  #ViPerformAMI #ACLPlayItSafe

Help us ring in 2018 right by spreading the word and helping to prevent athletic injuries.

Dr. Nessler is a practicing physical therapist with over 20 years sports medicine clinical experience and a nationally recognized expert in the area of athletic movement assessment.  He is the developer of an athletic biomechanical analysis, is an author of a college textbook on this subject  and has performed >5000 athletic movement assessments.  He serves as the National Director of Sports Medicine Innovation for Select Medical, is Chairman of Medical Services for the International Obstacle Racing Federation and associate editor of the International Journal of Athletic Therapy and Training.   He is also a competitive athlete in Jiu Jitsu.