How Do We Know When Is Time To Return To Sport? - Part I

Over the course of the last several years, we have posed the question, “Does Return to Sport = Return to Sport Same Level?”  This is a topic that is still not quite clear in the research and one which is becoming clearer and hotly debated.  What is reported in the literature depends on how you quantify return to sport.  Are we looking at returning to play at same level of sport or is it returning to play with pre-injury level of agility, speed, power?  How do you determine pre-injury level of agility, speed and power?  This will vary greatly by sport.  However, we are starting to see researchers look more closely performance measures when looking at "return to play".  Some of the current measures being assessed include:
Depending on how you quantify your return to play criteria will often lead to varied interpretation of the results.  In research, performance measures have not been typically evaluated and as such, reporting return to play percentages have been a lot higher than what we see on the field.  The sad part is that teams, coaches and players know the reality and don't need a peer reviewed paper to tell them that these injuries are having a huge impact on performance.  Just looking at NFLs own data from 2013 to 2015 and comparing reported knee injuries to percentage of games won and the reality is clear.  Teams with the highest knee injury rates won 33.9% of the time versus teams with lower knee injury rates who won 52.7% of the time.

In a recent study by Anand et al, Am J Sports Med 2016, we see when we start to look at some of the performance criteria, that the percentages are much lower than previously reported.  Read et al Am J Sports Med 2017 looked at NFL defensive players who underwent an ACLR and looked at their future performance once they returned to the NFL.  What the authors found was that those that did return to play, only 57% started games versus preinjury where 81% started.  These same players also had a reduction in solo tackles which dropped from 3.44 pre-injury to 2.38 post injury.  Is this impact only on football players? 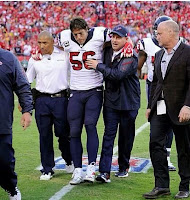 What the authors found was that NFL players fared the worse of all the sports assessed.  NFL players had a significant impact on their career length where the average player had their career shortened by 2 years.  In addition, NFL players saw a negative impact on all performance measures for up to 2 years post ACLR.  NBA players demonstrated a decrease in athletic performance for one season after return to play but returned to pre-injury status during the second season upon return to play.  In this study, NHL players had the best results with a much higher rate of return to play and much shorter recovery time.

So how do we currently make the call to return an athlete to sport?  Who decides when it is time to return to sport and how do we know if the athlete is ready?  Currently there is not a standardized way to make return to sport calls.  Wilk et al, J Sport Phys Ther 2014, in an editorial and literature review, asked that very question.  Can we do better?
This is something that is desperately needed and being asked for.  More often than not, making this call relies heavily on the surgeon to aid in making that decision.  Often the surgeon will base this decision on what the current research says about tissue healing and graft strength, an extensive orthopedic exam performed in his office, comparison of involved limb to non-involved limb strength on Biodex testing and often feedback from the treating physical therapist or athletic trainer.  In a literature review performed by Nessler et al Curr Review Musculoskelet Med 2017, the authors found the literature highlights several factors that should be assessed when evaluating an athlete for risk or for return to play.  This includes:

Stay tuned next week as we continue this discussion on when is the proper time to return to sport.  For more information on this topic and more, make sure to follow us on twitter @ACL_Prevention or on Instagram @bjjpt_acl_guy.


Dr. Nessler is a practicing physical therapist with over 20 years sports medicine clinical experience and a nationally recognized expert in the area of athletic movement assessment.  He is the developer of an athletic biomechanical analysis, is an author of a college textbook on this subject  and has performed >5000 athletic movement assessments.  He serves as the National Director of Sports Medicine Innovation for Select Medical, is Chairman of Medical Services for the International Obstacle Racing Federation and associate editor of the International Journal of Athletic Therapy and Training.   He is also a competitive athlete in Jiu Jitsu.