Is There A Secret Sauce? - Part II

When evaluating human movement on a regular basis, you start to identify certain trends for normal movement and abnormal movement.  It is these deviations from “ideal movement” that have been researched for the last decade and which have been correlated to injury risk.  Reiman et al as well as others have linked proximal hip weakness and the adduction in the frontal plane that occurs as a result to be directly correlated to risk for knee and ACL injuries.  When viewing this example of an Olympic athlete, it is easy to see how she may be at risk for injury.  However, it has not been well accepted the impact that this also has on performance.  This despite the fact that Meyer et al as well as others have shown that improvement in these abnormal movements result in performance improvement, increased power output and strength gains.  If we think about the previously mentioned athlete and imagine that she is a sprinter, we can imagine the impact these movements would have on kinetic energy transfer, efficiency of movement and power generation with explosive power.  Although this concept is easy to see conceptually, it has not been fully vetted in the research. 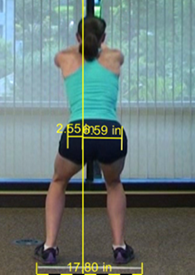 However, one abnormal movement trend we have not heard a lot about is the lateral shift that occurs with squatting motion.  For the last 12 years with our movement assessment, we have been describing and capturing this lateral shift of the pelvis that can occur with a squatting motion.  Never heard of lateral shift?  Unless you have been exposed to our blog or one of our courses, you probably have not.  However, in the last year, we have started to see it described in the literature.  In the May 2013 issue of the Journal of Strength and Conditioning, Atkins et al described a lateral displacement of the pelvis during the squatting motion (i.e. lateral shift).  The authors looked at this displacement during the squat and its impact on force distribution through the lower kinetic chain as measured with a force plate.  What they found, was greater force on the side the athlete shifted to and less on the side they shifted away from (in this picture more force on the right limb and less on the left).  So what exactly is a lateral shift?
When an athlete is in stance and prior to initiation of a squatting motion a plumb line is dropped from cervical spine to lumbar.  This indicates midline.  During normal motion, the hips should be relatively equal distance from this plumb line throughout the motion.  If they are not and the athlete shifts to one side, this results in increase load to one side versus the other and altered force attenuation on one side versus the other.  This has both implications for injury risk and altered force production.  When an athlete demonstrates a lateral shift, this can also result in a lack of ankle dorsiflexion and knee/hip flexion.  In the Olympic athlete pictured above, you can see her shifting her weight to the right results in decreased ankle dorsiflexion on the left and increased dorsiflexion on the right.  In recent study in the Journal of Knee Surgery, Sports Traumatology, Arthroscopy, Mallory et al looked at ankle dorsiflexion and correlation to increased risk for ACL injury.  What they found was that those who demonstrated a lack of dorsiflexion also ended up with increase in adduction moment at the knee which increases ACL injury risk.  So is it the lack of dorsiflexion that is leading to the increased risk or the lateral shift that is leading to the lack of dorsiflexion which is also associated with risk?  Either way, capturing and correcting this movement is vital.  In this Olympic level athlete pictured above, you can clearly see the deviation to the right throughout the squatting motion.  This would be termed a right lateral shift and something that would be imperative to start correcting.  There are many potential causes for this lateral shift which is beyond the scope of this paper so here we are going to talk about correcting.
Outside of a bony abnormality or bony block, we find that this can be corrected in as little as 2-3 sessions.  How?  First and foremost is showing the athlete the motion.  Whether you use a mirror or video, allowing them to identify the lateral shift on themselves is a critical part to the motor learning aspect as well as the compliance.  As the practitioner, also correlating this lateral shift to not only the injury risk factor but also the impact on performance is key.
One thing that often happens when attempting to work with someone on correcting a lateral shift is they tell you “it feels weird”.  Why does it feel weird?  Proprioceptively, they have trained their body that the position of the lateral shift is normal or neutral.  So, as a part of their re-training, we must retrain their proprioceptive system to what is neutral or normal.  How do we do that in a way to make rapid changes?  If a part of the sense of weirdness is coming from proprioceptive input, then we can use the research to guide on ways to do that.  We know from the stroke literature that visual input can aid in motor learning and in correcting pathological movement patterns.  We also know from Lattanzio et al research in 1997 as well as others that fatigue results in decreased proprioception. Trans et al research in 2009 taught us that whole body stimulation and over stimulation can result in more rapid changes in proprioception.  So, if we could combine all this knowledge should we not have even better results.  If we use exercises that provide visual input, cause neuromuscular fatigue and overload the proprioceptive system with stimulation, shouldn’t we see even faster and more rapid changes?  That is exactly what you do see.  Implementing these concepts into your squat neuromuscular retraining will result in more rapid changes and allow you to correct a lateral shift in 2-3 sessions.  That is evidence based practice!
We hope that you found this blog insightful and useful.  Next week we will discuss how to determine the weak link in the system and using that to drive your intervention.  As we stated previously, stay tuned and if you like what you see, SHARE THE PASSION!  It is the biggest compliment you can give.  Follow us on Twitter @ACL_prevention and tweet about it.  #ACLPlayItSafe and help us spread the passion.


Dr. Nessler is a practicing physical therapist with over 20 years sports medicine clinical experience and a nationally recognized expert in the area of athletic movement assessment.  He is the developer of an athletic biomechanical analysis, is an author of a college textbook on this subject  and has performed >5000 athletic movement assessments.  He serves as the National Director of Sports Medicine Innovation for Select Medical, is Chairman of Medical Services for the International Obstacle Racing Federation and associate editor of the International Journal of Athletic Therapy and Training.