Throughout the course of this series, we have been providing some clinical commentary around 5 key areas:

To close out this series, we are going to be talking about how sometimes movement is just movement and we try to over complicate it.  I sometimes amazed how some "experts" in the area of movement come up with some amazing exercises to improve movement.  Yet, I am puzzled by these same individuals and some of the strategies they employ.  As someone who follows the literature, I am not sure how holding my tongue to the roof of my mouth while contracting my abs or holding a balloon in my mouth during abdominal exercise or how rolling around on the floor using pediatric movement patterns will help me move better during cutting or explosive activities.  I am sure there is some form of legitimacy to these exercises and correlations to upright explosive movement.  But I think we tend to over complicate things and when we do things like this, it makes it hard for the athlete to see the correlation.  From a sports psychology standpoint, that to me is just as critical.  Get the athlete's buy in.  If they don't buy in then compliance and effort drops off.  So how do we avoid that?  Don't over complicate it and make it relevant to what they do.

This is not rocket science, this is movement.  We don't have to apply theoretical models, we can simply look at the science and apply what we know.  If we had to limit it to one or two things that we know have a direct correlation to movement and injury risk mitigation and performance enhancement, what would it be? 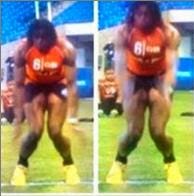 Depending on who you ask, the answer will vary.  In my opinion, it would be control of frontal plane motion of the lower kinetic chain. Whether you are looking at this picture of this young high school athlete or this professional football player, we can all see how this motion will result in:


As we have talked about in the previous blogs, this frontal plane motion "risk factor" can be measured by two components:


This is simple physics.  Looking at the force that is imparted to the structures.  Greater  the magnitude over the same time = greater force.  2 equal magnitudes but one occurs faster, than that one generates more force.  In coaching terms, if 2 athletes travel the same distance and athlete 1 travels distance in half the time, he is said to have more power than athlete 2.  As we have stated in previous blogs, the easiest way to see this is with single leg activities.  Some examples and recommended guidelines include:
If you have limited time and resources, single leg squat is the quickest and best indicator.  We all realize there are others but if we want to address 80% of the problem, this is where you will get the biggest bang for your buck.  Considering this, do we have to get overly complex in our training?  Again, for the biggest bang for the buck, keep it simple!


Warm up:
Dynamic Lunge:  Key in this exercise is to make sure they are able to get through the motion while controlling the frontal plane motion of the knee.  This is especially important on the step through phase of this exercise.

High Knee Toe Up: Key in this exercise is to bring the leg up into straight flexion and to control the frontal plane motion of the stance leg during.


Strengthening:
Standing Gluteus Medius - this is an endurance exercise for the G.Med but has a single limb performance component.  Make sure to control the frontal plane motion of the knee during the performance of this exercise.


Single leg lumbar hip disassociation - this exercises utilizes the CLX to pull the knee into a valgus and internally rotated position thus requiring greater activation to prevent this motion.  Keep a close eye on the stance limb position during.


Single leg squat - there is no video with this one but the contralateral leg is held in a slight extended position and the athlete squats to 30-45 degrees while maintaining frontal plane control at the knee.

These are some simple exercises we can implement that have a direct impact on the measures we know put athletes at risk.  If we carry this same methodology over to our lunges, step up, squats and other forms of training, then we should see a direct impact on frontal plane motion control.  Keeping it simple and direct to the measures we are measuring is the most direct route to mitigate risk and improve athletic performance.

If you would like more exercises focusing in this area, you can download our free app on IOS and Android by searching "PhysioSports".  The #ACLPlayItSafe app provides four levels of progression to the ACL Play It Safe Program which can be implemented as a part of your team's performance enhancement & injury prevention protocol.

Thank you for following our blog in 2016 and hope you will continue to find this a worthwhile read in 2017.  We will be taking the next 2 weeks off and resuming our blogs on Jan 9, 2017.  To kick off the new year, we will share some technology advancements we have seen that can be leveraged to drive better, faster outcomes with improving movement.

From my family to yours, we wish you and yours a bless, happy and safe holiday season.