In this blog series, we will look at several common pathokinematic movement patterns seen in athletes and discuss the influence these have on joints, ligaments and muscles.  We will also review a few of the more commonly seen injuries that can result from these abnormal movement patterns in the lower extremity and touch on a few related performance issues that can also arise when pathokinematics are present and the kinetic chain is compromised. 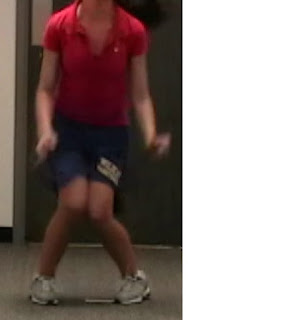 Why would this be so if these are the established patterns of movement for this individual?  Pathokinematic movement patterns such as those in this example result in forces being distributed throughout the system or along the kinetic chain, in an abnormal fashion—in other words, in a way that is different from the way the system was designed to absorb force.  We refer to this as abnormal force attenuation and over time abnormal force attenuation can lead to various injuries along the kinetic chain, all the way from the foot and ankle up the chain to the lumbar spine.  Attenuation is defined in this case as the gradual loss and ultimately the extinction  of energy (force) as it travels through a medium, in this case the lower extremity of the human body.


Much like a car is designed to have optimal performance when the weight distribution is equal across all four tires, the human body is designed to perform optimally when it absorbs force equally at the two places it touches the ground—at the feet.  This enables the structures of the body to equally distribute and put those forces to use for efficient movement with the least amount of destructive stress placed on the muscles, joints, ligaments and tendons of the body.


In the human body, during movement and in sports, loading variations from the “optimal position” can and do occur under certain circumstances.  This is common and, through proper conditioning, injuries can be avoided during high load or force situations.  However, if loading variations that distribute force unequally across the lower extremity become the norm or the predominant way the tissues are loaded over time, structural imbalances can occur that create wear and tear on the structures of the body and can lead to injury.


Injuries occur when the breakdown of tissues (from abnormal loading in this case) outpaces the body’s ability to repair those tissues.  Looking at this more closely, when force is distributed in an abnormal fashion a majority of the time, especially under high impact loads or forces, the body’s or tissue’s ability to respond quickly to and resist breakdown is compromised.  Using the analogy of the car, if your tires are low on one side for a short period of time, then the vehicle and tires usually sustain no damage.  When you fill them up to optimal air pressure, weight distribution is restored to normal and there is no damage done.  But, if your tires remain low on one side for a long time, then irreversible damage can be done to the tires, the shocks, the axle, etc.  Because the human body is a living organism, which is constantly adapting to environmental stresses and repairing itself, it can often resist abnormal forces for many years prior to showing the signs or symptoms of injury.  This is why in so many cases abnormal movement patterns are not noticed until after serious injury has already occurred.


This can also be true with some of the other pathokinematics that we discuss.  For example, many times we see patients or athletes who have developed a lateral shift with a squatting motion.  This compensatory movement can be the result of the individual attempting to move away from the side the pain is on but still accomplish the movement.  For example, if an athlete has pain in the right knee with squatting greater than 60 degrees, then he or she may demonstrate a left lateral shift when squatting to 80 degrees of knee flexion.  This allows him or her to accomplish the motion but at the same time avoid pain in the right knee.  Once the pain is resolved, the lateral shift often corrects itself, without the need for further intervention.


However, in some cases, these types of pathokinematic movement patterns will not self correct when the source of pain is addressed.  If in fact, they do not and the athlete carries the same pathokinematic movement patterns over to daily and/or athletic activities once the pain issue is resolved, then we can say that this movement pattern is likely no longer simply a compensatory strategy to avoid pain.  This movement pattern, or the “motor plan” that results in certain ways of moving, is the result of changes within the primary motor cortex.  In other words, the abnormal movement, over time, has resulted in a motor program which has become ingrained in the primary motor cortex and is the primary program to which the brain reverts in order to generate this particular movement whenever it is needed.


Therefore the lateral shift during a squatting motion can become the “natural” program which the brain uses for all subsequent squatting motions.  Despite the decreased efficiency of such a movement and the abnormal force attenuation that it will impart to the tissues, it will remain the primary program the brain will use unless it is re-trained otherwise.  The program must essentially be “re-written” in some way, rehearsed and relearned over time.  So, much like the baseball pitcher who has developed poor throwing habits that we talked about in an earlier chapter, poor movement patterns like these must be retrained in order to be permanently corrected.  Just like correcting a pitcher’s pitch, new movement patterns, once relearned, must be reinforced over and over again in order to “reprogram” the brain to automatically move in this way when required.


Although some of the pathokinematics we describe result from compensatory movement to avoid pain or weakness, or are movements that have become programmed in the primary motor cortex over time for some reason, there some pathokinematic movement patterns which do not fall into either of these categories.  For example, the hip adduction and internal rotation that occurs with jump stops or single leg squats are not the result of compensatory strategies.  Since these movements result in abnormal stresses to tissues (such as the shear stress to the ACL or meniscus during jump stops) and are more likely to cause pain as opposed to relieving pain if present, then these are more likely the result of other factors.


In many cases, these types of movements are the result of many factors in combination such as muscle weakness, or tightness, poor proprioception or the development of poor movement habits (perhaps due to pain, injury or improper instruction) earlier in their career.  If these movement patterns are never addressed and corrected, then they will continue and eventually become part of the primary motor plan as well.  Over time, this can result in even greater asymmetries in strength, continued or increasingly abnormal recruitment patterns (sequence by which muscles are activated) and an even higher increased risk for injury.  Regardless of the causative factors, if not corrected, pathokinematics ultimately result in abnormal force attenuation throughout the kinetic chain.  This will break down the structures of the body and can lead to pain or injury, which then can lead to additional or more exaggerated pathokinematic movement patterns.  Ultimately, this order of events can eventually become part of a “vicious cycle” leading to additional pain/injury, even more avoidance-related movement patterns, and new and more widespread weaknesses.
Next week we will continue this discussion by looking at the impact this has on common athletic injuries of the lower kinetic chain.  If you like what you read, the biggest compliment you can give us is sharing the passion.  Follow us on twitter @ACL_prevention or follow us on Facebook at Athletic Therapy Services.  Remember,  #MoveRight and last longer and perform better.
Posted by Dr. Trent Nessler at 4:00 AM