Squat Jump Vs. Counter Jump - Squat As A Performance Measure


Because the squatting motion is such a fundamental movement in sports and is often used as a performance measure, we will look at a recent study which evaluates two different techniques for measuring vertical height.  In the October 2013 issue of The Journal of Strength and Conditioning Research, Mackala et al performed a biomechanical analysis of the Squat Jump and Countermovement Jump.
Since this is not well defined in the authors’ paper, it is helpful to describe the difference between the Squat Jump and the Counter Movement Jump.  In this case, the squat jump (SJ) is defined as a jump that is performed from a squatting position.  A counter movement jump (CMJ) is defined as a jump where the subject starts in a straddle position (one foot slightly forward), squats down to a pre-determined height and immediately jumps up from that position.  The CMJ is more of a short duration preloading of the musculotendinous junction followed by an immediate contraction.  In other words the CMJ is more of a proprioceptive neuromuscular facilitation (PNF) or plyometric type of movement versus the SJ. 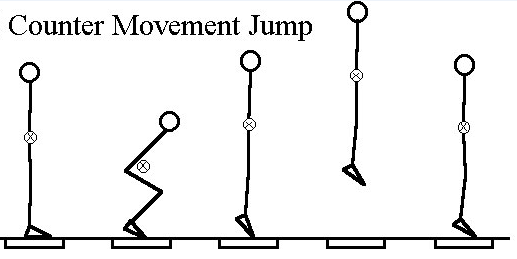 Methods:
In this study a total of 6 male 100 and 400 m sprinters were tested for vertical jump ability.  Each subject performed a short warm up prior to testing.  Vertical jumps were performed on 2 force plates and each subject was connected to EMG device which assessed percentage of maximal volitional contraction (MVC) for the gastrocnemius, gluteus maximus, rectus femoris, tibialis anterior, biceps femoris and vastus medialis.  3D motion capture was also performed and subjects joint motion was captured in the frontal plane for all joints with the exception of trunk (which was captured in frontal and transverse).  Each subject performed 3 maximal SJs and after a five minute rest performed 3 maximal CMJs.


Results:
CMJ height (85 cm) was 8.97% higher vertical jump when compared to the SJ height (78 cm).  There was not a significant difference in joint angles during each of the movements but some notable differences when comparing MVC right to left.  Since all the sprinters’ natural position was placing the left foot forward, there was some notable differences in the gastrocnemius, vastus medialis and gluteus maximus with the right producing higher % MVC in comparison to the left.


Discussion:
Considering previous studies on plyometric training and % of MVC, the results here are not surprising.  Previous studies have shown us that a plyometric or PNF type of movement results in a quick pre-stretch to the golgi tendon organ (within the musculotendinous junction) which results in the muscle producing a higher MVC and power output.  Since the CMJ is more of a proprioceptive type of technique, one would expect higher MVC and power output resulting in increased vertical height.  One would also expect, with the straddle position of the feet, that % MVC, when compared bilaterally, would differ.  Since all of the sprinters had the left foot forward, the results were similar across all athletes tested.  So, the question becomes is this more the result of muscle imbalances or is this more the result of the position.  Looking by joint, the peak joint angle at the knee, ankle and trunk on the right was significantly higher when compared to the left which would lead us to believe this may be more a result of the position.  However this cannot be answered under these conditions since there was not a control group or a group who place the right foot forward versus the left.


Two other variables that were not measured that would have been valuable for both injury prevention and performance enhancement are: 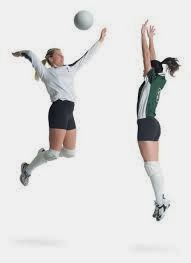 1.      Joint angle of the hip/knee in the frontal plane.  This would have indicated if there was a valgus at the knee or hip adduction that occurred during either the SJ or CMJ.  One of the most common deviations that occurs with this type of training is hip adduction and valgus.  To see the impact of those on % MVC would have been extremely useful.

In either case and as we stated in our previous article, this is a further indication of the importance of correcting lateral shift so that % MVC can be obtained and peak vertical height achieved.  So whether your sport is basketball, volleyball, soccer or sprinting, squat is an essential movement.
Posted by Dr. Trent Nessler at 4:00 AM