What is the Injury Risk for Amateur Soccer Players

Injuries are an inherent part of participation in any organized sport.  Certain sports are more susceptible to injuries than others.  For example, high impact sports have a higher rate of injury than low impact sports.  Athlete’s participation in some sports also makes them more susceptible to certain kinds of injuries versus participation in other sports.  As an example example, concussions are more common in football than they are in basketball.  When looking at risk, most will rank risk based on # of injuries per # of athletic exposures (AE).  An athletic exposure is typically defined as including the number of practices and/or games an athlete participates in.  So a sport with a risk of 20 XX injuries/1,000 AE has a much higher rating than 2 XX injuries/1,000 AE.  In one such study performed in 2006, Mihata et al compared ACL injury rates in women’s basketball, lacrosse and soccer to men’s over a period of 15 years.  What they found was: 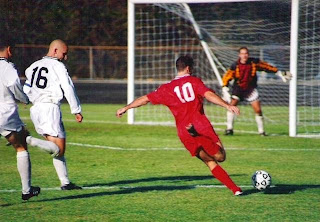 
o   Basketball .08 per 1000 AE
Soccer is a very physically demanding sport.  The average collegiate and professional soccer runs an average of 6 miles per game.  Soccer is also a sport which there is a fair amount of physical contact during the game.  As such, soccer is one sport that has an inherent risk of injury.  When most people think of soccer and injuries, they typically think of concussions, ankle sprains, hamstring strains and ACL injuries. According to the previously mentioned study, women soccer players are 3 times more likely to suffer an ACL injury than their male counterpart.
With the growth of the sport of soccer in the US and abroad, it has led to a lot of focused research looking to determine the mechanisms for the majority of ACL injuries in the sport and what is the injury rate amongst recreational players so that we can develop better intervention strategies.  With over 265 million players worldwide, when considering the previously published risk ratings, conservatively, this could equate to potentially 5.3 million ACL injuries a year.  Knowing the increased risk for a 2nd ACL injury and risk for OA 12 years later, it is important for this kind of research so that we develop strategies that effectively reduce the risk of the 1st ACL injury.  In an article published online before print in the American Journal of Sports Medicine, Herrero et al did just that in a study entitled “Injuries Among Spanish Male Amateur Soccer Players: A Retrospective Population Study”.
Methods:  In this study the authors performed a retrospective epidemiological study of injuries sustained in Spanish amateur soccer during the 2010-2011 season.  During this time, any injuries that were recorded for the 134,570 soccer players ages 18-55 years old that were registered with the Spanish Football Federation were reported.  Using standardized FIFA medical questionnaire, injuries were classified according to the type, severity, location and treatment that was provided.

Results:  A total of 15,243 injuries were recorded during this time.  This resulted in an average of .11  injuries per player per year.  From this total, 67.2% resulted in time lost and 32.7% required medical attention.  Rate of injuries per 1000 hours of play was double during games (1.15/1000 hours) compared with injuries during training (.49/1000 hours).  Of the injuries that were recorded, 7.7% were goalkeepers, 24.2% were forwards, 33.8% were defenders and 34.3% were midfielders.  The majority of injuries occurred in the knee (29.9% of all injuries) and ankle (12.4% of all injuries).  32.1% of all injuries were ligament sprains or ruptures.
Discussion:  Reviewing studies like this provide us with some valuable information.  Information which we can take onto the field and, if used correctly, have a potentially significant impact on injuries in the sport.  However, one must critically analyze the data to make comparison to use in the US.  First is the culture.  Soccer in many countries is more than a sport, it is a way of life.  As such, children often get involved in the sport much younger in countries (such as Spain) than they do in the US.  Earlier involvement in the sport leads to improved skill acquisition, training, conditioning and would theoretically lead to lower injury rates.
That being said, the information gained should not be lost.  Knowing that 32% of injuries were ligamentous in origin and that 30% of injuries were to the knee, we can use this in our program development.  We know that if you improve the mechanics associated with ACL injuries, you also reduce the risk for other lower kinetic chain injuries by as much as 60%.  Therefore an intervention designed to do just that will aid tremendously in reducing all lower kinetic chain injuries which accounts for ~40% of all the recorded injuries noted in this study.  We also know if we could individualize our program to group by position, defenders, forwards and midfielders.  Doing so, may assist in addressing some common deviations noted by position and target specific injuries by position.  Using in this fashion should assist in reducing overall injury rates across the entire team and if widely implemented across the sport of soccer.
References:
Mihata L, Beutler A, Boden B.  Comparing the Incidence of Anterior Cruciate Ligament Injury in Collegiate LaCrosse, Soccer and Basketball Players: Implications of ACL Mechanism and Prevention.  Am J Sport Med.  34:899-904. 2006
Herrero H, Salinero J, Del Coso J.  Injuries Among Spanish Male Amateur Soccer Players: A Retrospective Population Study.  Am J Sport Med.  Published online before print Oct. 17, 2013.
Posted by Dr. Trent Nessler at 4:00 AM